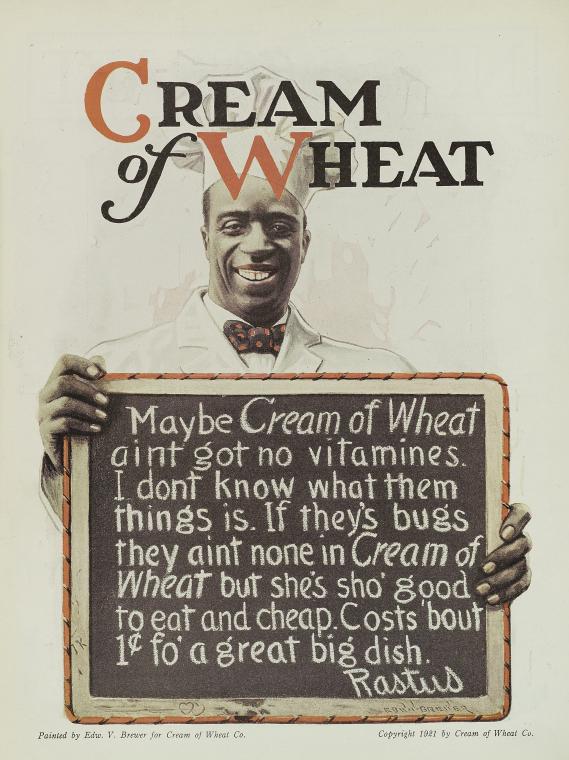 At a moment when Minneapolis had a very small African American community, the city became home to “Rastus,” an iconic caricature of a black man. “Rastus” was the symbol of the Cream of Wheat company, which relocated to Minneapolis in 1897 from North Dakota. Over the next 100 years, he was welcomed into households across the country.

Four years earlier– a group of North Dakota millers devised a way to turn wheat middlings–a byproduct of wheat milling–into a lavishly packaged “breakfast cereal” they called Cream of Wheat. Short on capital, miller Emery Mapes designed the packages for the “breakfast porridge” himself, emblazoning the cartons with an image of a jolly African-American chef he called “Rastus” after the cheerful simpletons depicted by Joel Chandler Harris in his Uncle Remus books. The image was offensive; like Aunt Jemima and Uncle Ben, this figure solidified white stereotypes of happy black servants. But the product was an enormous success, despite the desperate economic conditions of the country in 1893.

The Cream of Wheat company moved to the Mill City to ensure advantageous shipping rates and a dependable supply of the middlings necessary for its cereal. It pioneered a strategy that would prove central to the city’s economy by the 1920s, as Buffalo superseded Minneapolis as the nation’s milling capital. Cream of Wheat used innovative advertising and branding to create value for consumers. Using four-color printing the company cultivated desire for what was an inexpensive commodity.  The artfully-depicted scenes on the packages curried nostalgia for a simple and wholesome era of American life, when racial and ethnic hierarchies were unquestioned. The processed food industry was born.

The image of the former slave–“Rastus” –was central to the success of this product, which made company founder Emery Mapes millions of dollars. In this 1921 advertisement, Rastus was depicted as barely literate. His sign reads:

Ain’t got no vitamins.

I don’t know what them

Things is. If they’s bugs

They ain’t none in Cream

Of Wheat but she’s sho’ good

To eat and cheap. Costs ‘bout

The proceeds from this campaign built 2218 Lake of the Isles Parkway, a grand mansion for Emery Mapes on the city’s most elite lake. Despite ongoing protests, Rastus remains the personification of Cream of Wheat cereal today.

Advertisement is from the collections of the New York Public Library. It was published in Needlecraft Magazine from 1921 to 1923.

One thought on “Cream of Wheat: Race and the Birth of the Packaged Food Industry in Minneapolis”