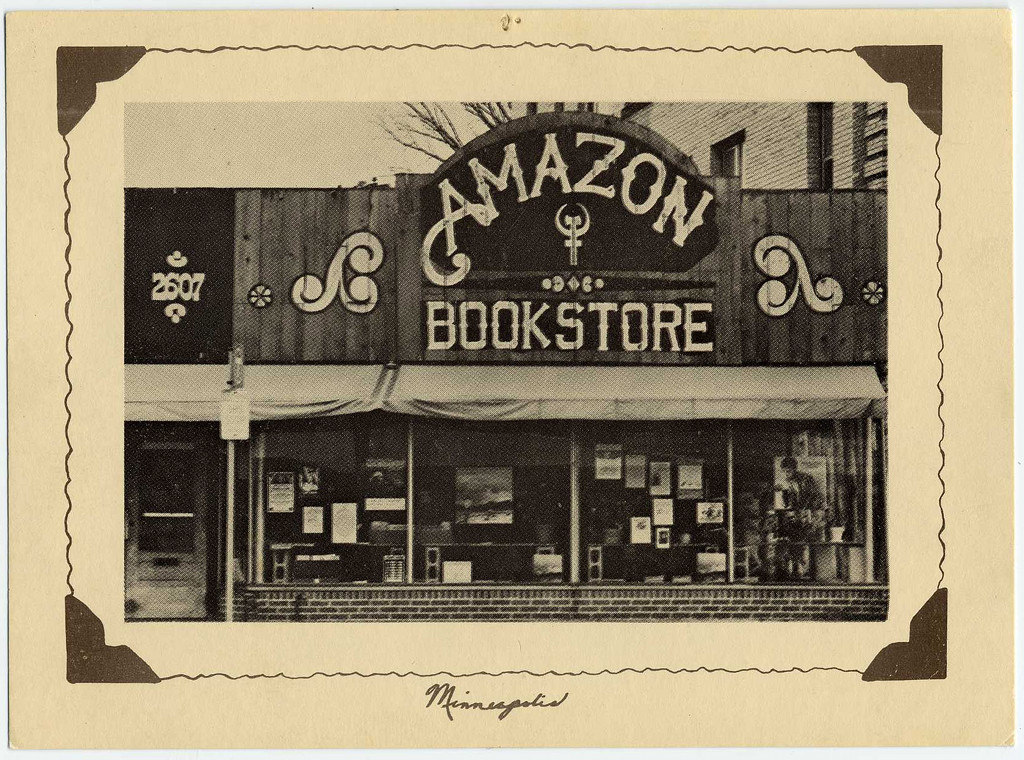 Guest blogger today is Stewart Van Cleve, a graduate student in the program for Library and Information Science at St. Catherine University and the author of Land of 10,000 Loves: A History of Queer Minnesota. In this post, Stewart writes about Amazon Bookstore, the first feminist bookstore in North America.

In the fall of 1970, Julie Morse and Rosina Richter carried several boxes full of books on feminism and women’s liberation to the front porch of a Minneapolis commune. Located a few block south of Franklin Avenue in the Seward neighborhood, and known as the “Brown House,” the commune was a locus of antiwar activism and draft resistance in the Vietnam War era, and thus fostered a revolutionary spirit that complimented Morse and Richter’s dreams for the small collection.  When they named the boxes and their contents “the Amazon Feminist Bookstore,” they founded the first independent feminist bookstore in the United States.

In 1972, after a year of sporadic management and scattered sales, Amazon made the first of many moves to the basement of the Lesbian Resource Center, a collective space that had recently opened next to Hum’s Liquor on 22nd Street in south Minneapolis. The bookstore continued to reside in a series of boxes, but its immediate proximity to interested readers helped volunteers acquire enough capital to move the collection to its first storefront, a short-lived space on West Lake Street. According to Finn Enke, who included a detailed analysis of Amazon in Finding the Movement Sexuality, Contested Space, and Feminist Activism, that section of Lake was “shady” to employees and customers. By 1975, they decided to relocate a third time to a storefront next to the corner of 25th Street and Hennepin Avenue in the Uptown area.

From 1975 to 1985—a decade that might be called Amazon’s “Hennepin era”—the store’s exterior featured a large hand-painted sign that included its most recognized symbol: the labrys, a double-headed axe that symbolized the ancient origins of women’s strength.  While the storefront’s sign, large windows, and central location allowed Amazon to attract new customers who sought information and a sense of community, it also attracted the attention of the FBI. Tasked with infiltrating and disrupting supposed threats to national security, the Bureau made occasional visits to thwart the “danger” of women’s liberationists and lesbian feminists, but its agents—suited men who asked clumsy questions in the middle of a feminist bookstore—had little success.

By 1985, Amazon had outgrown its Hennepin location. It moved to a larger space that faced Loring Park on Harmon Place, the store’s most permanent and, for many, memorable address. It featured event space, larger windows, and a reading loft that became fixed as “Madwimmin Books” in the imaginary world of Dykes to Watch Out For, a landmark comic strip created by Alison Bechdel. Amazon also led an historic battle against the online retail giant Amazon.com, which used the shared name without the older store’s permission and was ultimately forced to reach a settlement.  Though the Harmon years were arguably the store’s most successful, they were also its most expensive; by 2001, it moved once again to the newly-built Chrysalis Women’s Center on Chicago Avenue.  In 2006, after a final move to 48th and Chicago, Amazon changed its name to “True Colors” and closed for good in 2012.

This postcard shows Amazon’s second storefront on Hennepin Avenue. It is from the Amazon Bookstore Cooperative Records, which are housed at the Jean-Nickolaus Tretter Collection in GLBT Studies at the University of Minnesota.