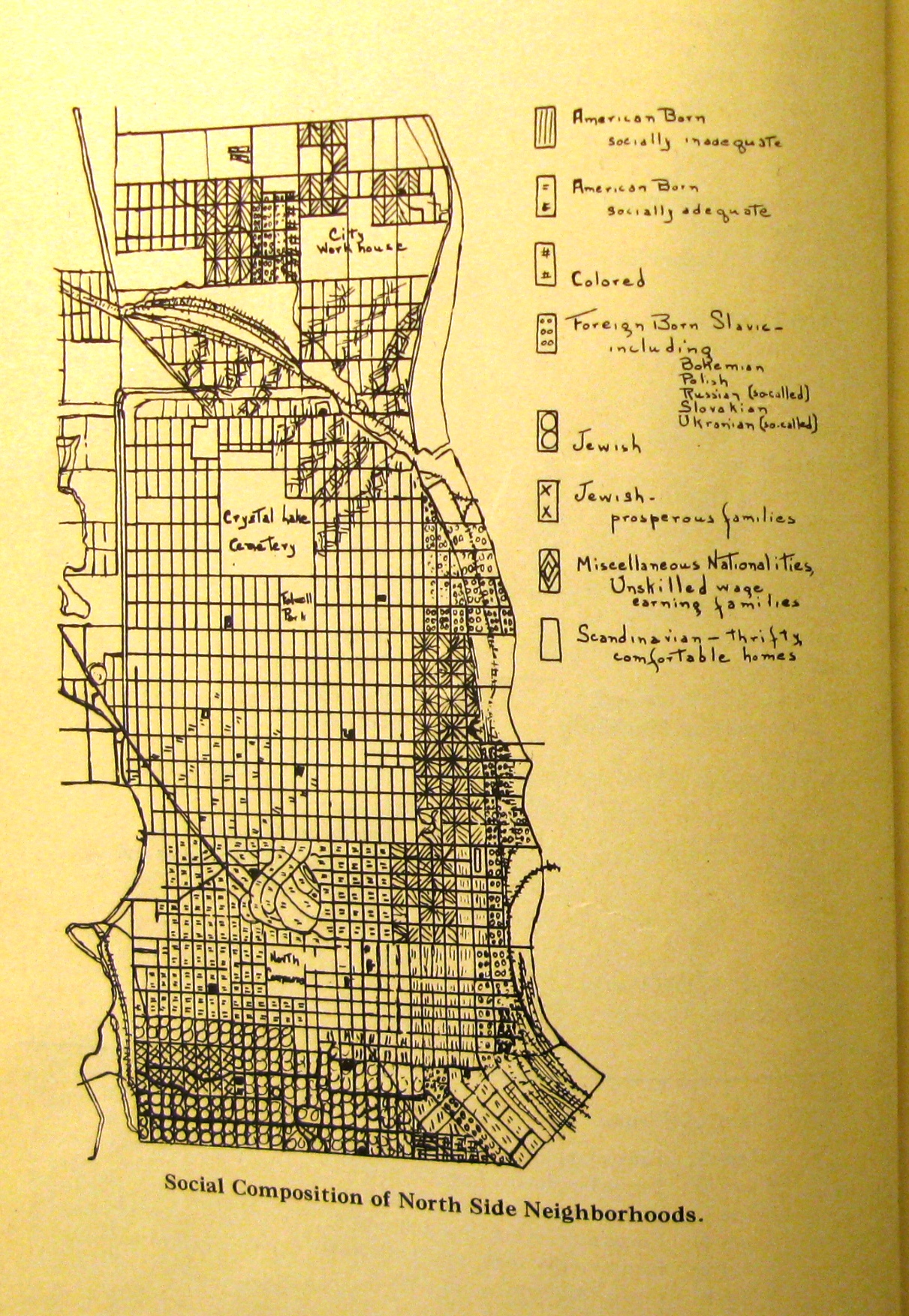 It’s map Monday. This “Social Composition of North Side Neighborhoods” was drawn by a researcher associated with the Women’s Cooperative Alliance, which assembled an encyclopedic analysis of moral conditions in the city in 1925. The Cooperative Alliance was a consortium of women’s groups organized in April, 1917 to identify and eradicate conditions contributing to juvenile delinquency.  The Alliance had broad community support and attracted active representatives from nineteen local women’s organizations, including the Council of Jewish Women, the Woman’s Club of Minneapolis and the League of Catholic Women.

None of this would be obvious from this map, which seems merely to codify popular ethnic and class prejudices. The key on the right side shows how the research cartographer divided this district into sections defined by race, ethnicity, class and moral rectitude. It delineates blocks of “American Born, socially inadequate” from “American Born, socially adequate.” It distinguishes areas inhabited by “Colored” from those dominated by “Foreign Born Slavics” from those defined as “Jewish” and “Jewish, prosperous families.” These categories were separate from the sections annotated as “Miscellaneous Nationalities unskilled wage earning families” and “Scandinavian- thrifty comfortable homes.”

These crude characterizations obscure the complex and contradictory mission of the Women’s Cooperative Alliance, which employed twenty-four staff members, who had assembled this data in this report to demonstrate the need for a more wholesome urban environment for children. They lobbied for improved lighting in the city parks and better enforcement of juvenile curfew laws. They monitored the treatment of women and children in the judicial system—an issue that I will discuss more in a later post. They fought to mute the siren song of commercial amusements. The women associated with the Alliance would have been delighted to see the city shutter all of its dance halls, pool halls, movie theaters, candy stores and carnivals, just as Prohibition had closed its saloons.

The work of the organization had yet another element. More than 3,000 women volunteered with the Alliance to serve as block, precinct and ward workers, who were charged with visiting every home in their district to ascertain conditions and educate mothers. They hoped to reach out to immigrant mothers in particular, who they feared had neither the resources nor the knowledge necessary to keep their children out of pool halls, movie theaters, saloons and dance halls.

This map—which was part of the group’s five-part Study of Social Conditions–sought to guide this work by illuminating where education was most necessary. The accompanying text explained that the moral crisis was acute on the city’s North Side where the greatest “evils” were “prostitution and the liquor traffic. Not only are many of the furnished rooms over stores on Sixth Avenue vice resorts, but in many of the homes through the district women are prostituting themselves before their little children.” There was plenty of blame to go around, the writer asserted. “This vice is not confined to one race but occurs between colored and white, both Gentile and Jew. It does not include many Jewish women. The making of liquor, however, is reported by social workers to be common among the Jewish women and under cover of junk peddling it is easily distributed.” The problems of the North Side, according to the researcher, were rooted in its polyglot character. “The mixture of races in this district is detrimental,” she concluded. “The situation grows more serious because of the continual influx of migrant people of both races.”

The map is from a Study of Social Conditions, held at the Minneapolis Collection at the Hennepin County Central Library. Information about the Cooperative Women’s Alliance is from the vertical files at the Minneapolis Collection  and Leigh Ann Wheeler, Against Obscenity: Reform and the Politics of Womanhood in America, 1873-1935 (Baltimore: Johns Hopkins University Press, 2004).