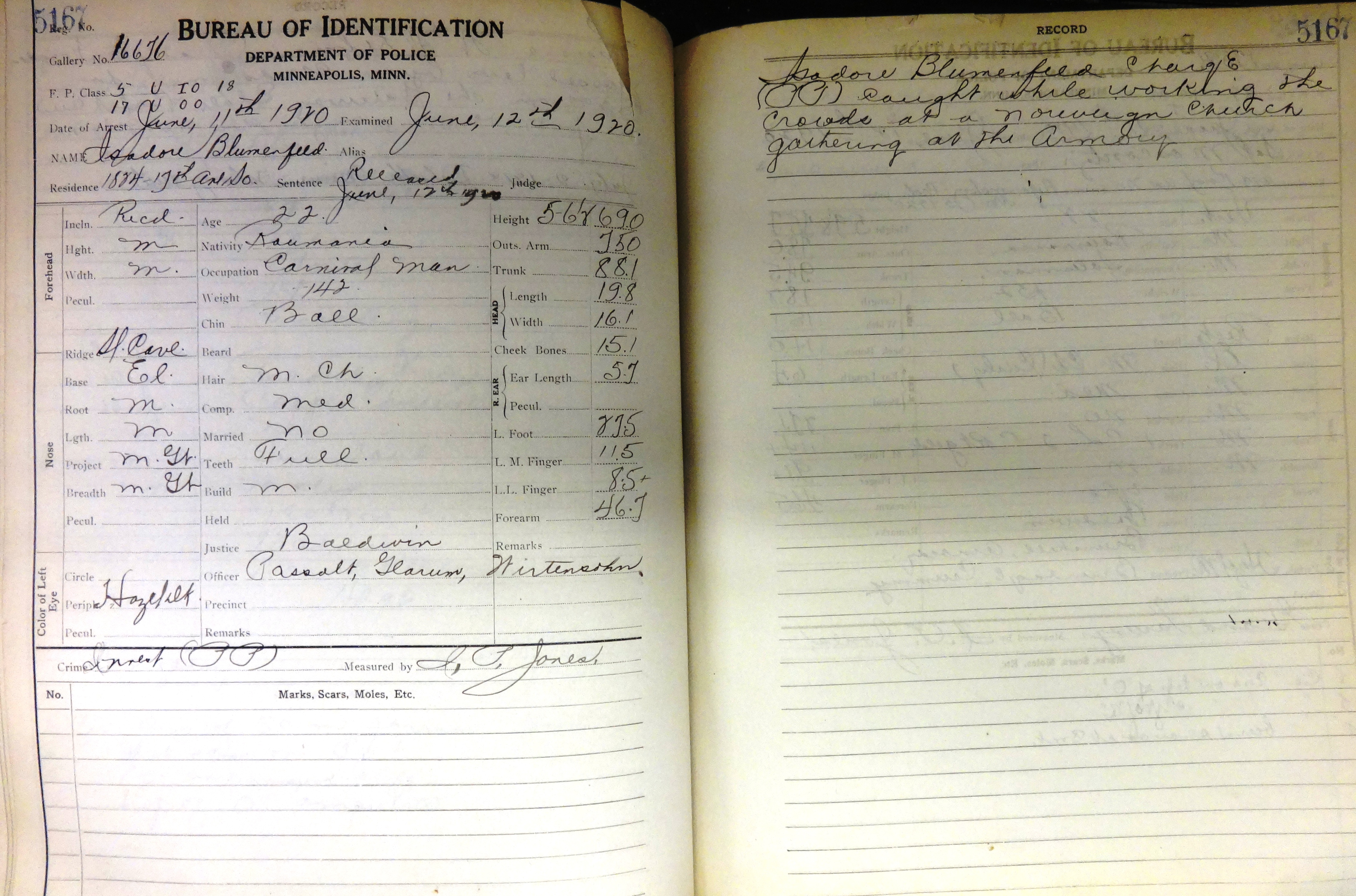 On June 11, 1920, a “Roumanian carnival man” by the name of Isadore Blumenfeld was arrested by Minneapolis police.  The young man had been brought into custody for “working crowds at a Norwegian church gathering at the Armory.” Blumenfeld was a pickpocket, according to this record. And had probably done pretty well for himself until he made some move that attracted the attention of law enforcement.

Police followed procedure. They recorded the charges against Blumenfeld, along with a brief physical description. And then Officer Jones set to work, measuring  eleven other parts of Blumenfeld’s body. Jones calculated the height and length of his head; the length of his left, middle and little fingers; his left foot; his left forearm; his right ear; his outstretched arms; and finally his trunk (the distance from the top of the head to a bench, for a seated person). He noted that Blumenfeld had a full set of teeth.

By 1920, most police departments had dispensed with this system of criminal identification, which was known as Bertillonage. Invented by French police clerk Alphonse Bertillon in 1883, this classification scheme was rendered obsolete by fingerprinting. But Minneapolis had been late to adopt this system. And it was slow to give it up. Which is why we have a complete set of physical measurements for the most notorious gangster in Minneapolis history. In the decade that followed his arrest, the Rumanian immigrant called Isadore Blumenfeld became the infamous Kid Cann, one of the most successful bootleggers of the mid-twentieth century.

In 1920, Blumenfeld was charged and received some kind of sentence, which was not recorded in the ledger. In the years that followed, he would abandon petty thievery in favor of the new business opportunities presented by Prohibition. Blumenfeld became a powerful leader in the illegal liquor trade in Minnesota during the 1920s. And when Prohibition was lifted in 1933, Blumenfeld used the social and economic capital he had accrued to corner the retail liquor business in Minneapolis.

In exchange for operating freely in the city, Blumenfeld gave generously to local political campaigns. And he diversified his business holdings, investing heavily in real estate in Las Vegas and Florida. He was pursued by the FBI for decades. And accused of multiple murders. But he was also known as generous and loyal to friends, family and community. He died an old man in 1981; at his funeral many people lauded Blumenfeld as a stalwart support of Jewish institutions in Minneapolis.

This page from the Bertillon ledger is another one of the treasures from the tower archives at Minneapolis City Hall. Historyapolis is working this month to illuminate the holdings of this forgotten cultural repository.