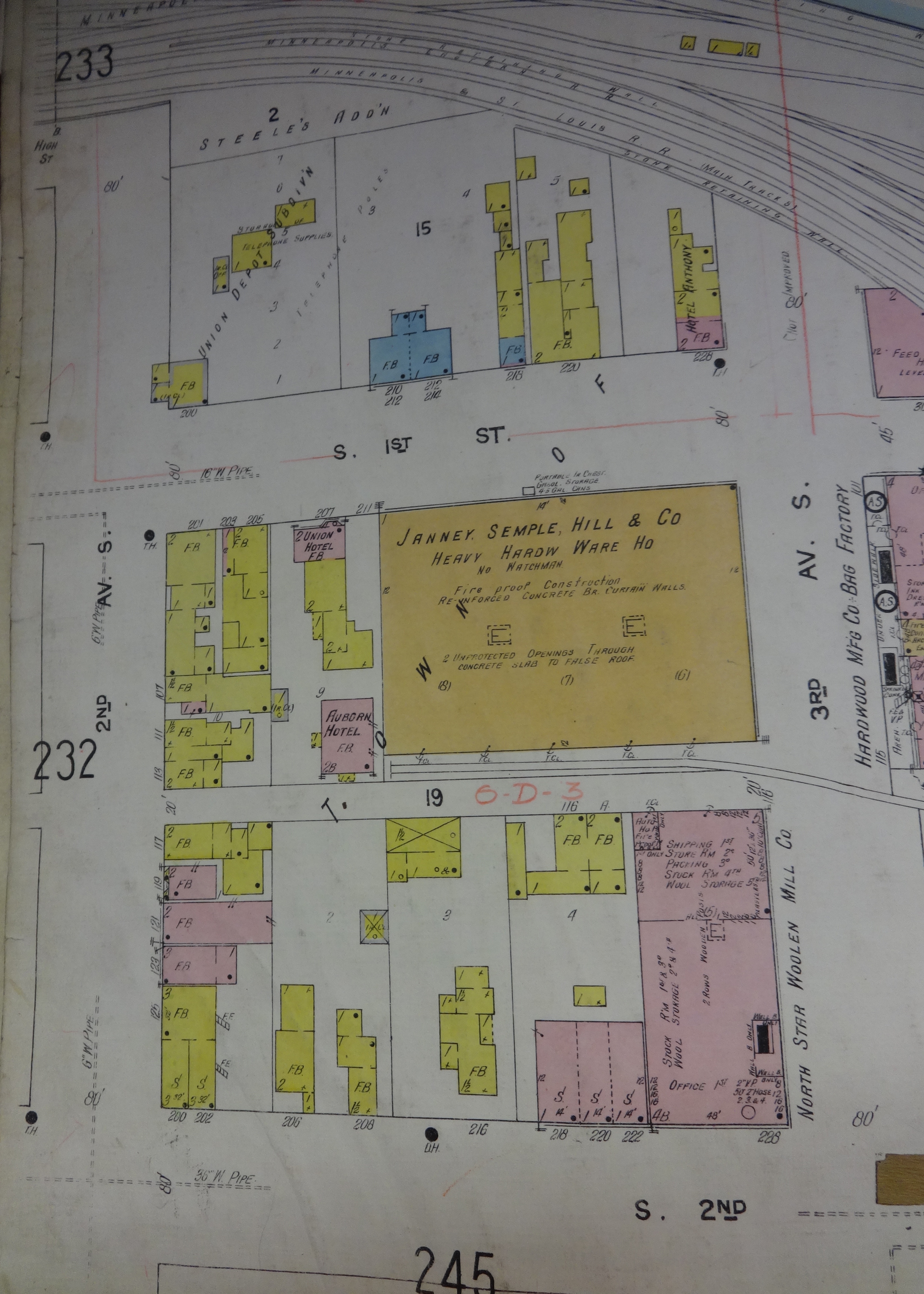 It’s map Monday and we have another great image from the 1912 Sanborn maps in the Tower Archives at City Hall. These maps—which were created by the insurance industry to determine fire risk to structures–provide a unique glimpse into the city’s past.

This plate shows First Street South and Second Avenue South, which was once a thriving red-light district. The Sanborn cartographers marked various buildings with the notation “F.B.” –which was shorthand for Female Boarding. This phrase–according to historian Penny Petersen– was a euphemism for brothel. While some of the building were likely legitimate female boarding house, at least five were known brothels in 1888 and likely still served a similar purpose in 1912.

During the late 1800’s, First Street South was the heart of the Minneapolis red-light district and also laid within Bridge Square, the growing industrial center of Minneapolis. For numerous Madams this area was the prime location to operate a brothel – serving wealthier business men and other riverfront workers. By the 1890’s, as Minneapolis’ growth shifted away from the river front, the Bridge Square area began to decline. With the shift, came an increase in saloons, cage hotels and a decrease in wealthier clientele. Being shrewd business women, many Madams shifted their operation across the river to Main Street and later to 11th Avenue South, where they continued to provide service in lavishly decorated brothels to Minneapolis’ wealthy business men.

Even as the First Street red-light district lost its glow for the higher end madams, it retained its draw for lower end madams and other prostitutes. Established houses of ill repute served as a starting point for many up and coming Madams. Add in a ready set of clientele, thanks to the large population of lumberjacks, agricultural workers and transient laborers, and the First Street red-light district thrived and continued to grow especially as Bridge Square grew into Minneapolis’ skid row.

Despite on-going efforts to close down the red-light districts by various reform groups, Minneapolis Police and City Official remained tolerant of the segregated vice. Officials even developed a system where Madams would appear monthly in court, plead guilty to running a brothel, pay a fine and pay $10 for each girl working in the brothel. The Madam’s fine started out at $50, but would increase to $100 in the ensuring years. In 1879, the fines netted the city approximately $9300. Funds raised by the fines went to the city coffers, a portion also went to the Bethany Home – a reform home for former prostitutes.