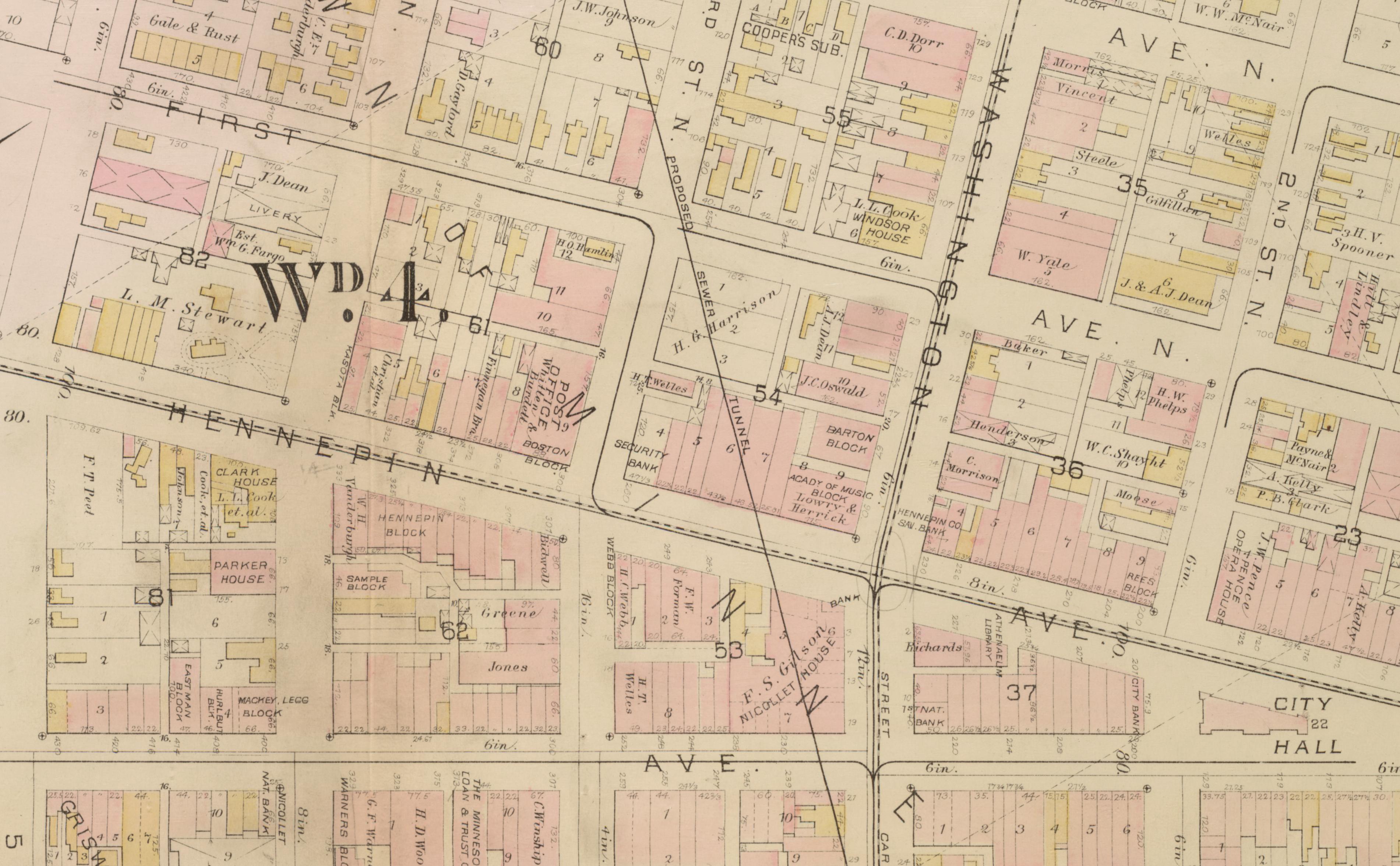 It’s Map Monday. Our selection today takes us back to 1885. This detail from the Hopkins plat map shows the intersection of Washington and Hennepin Avenues at the moment when this junction was the commercial heart of Minneapolis. On the right side of the image is the City Hall, located in the area known as Bridge Square. At the time this municipal building was constructed in 1873, this crossroads was the gateway to the city, the main artery for traffic across the Mississippi River from St. Anthony and St. Paul.

At the center of the frame is the Academy of Music, which was built in 1871 and was considered the “finest theater in the Northwest,” according to local historian and booster Isaac Atwater. Containing a “spacious auditorium” seen as “far in advance of the city’s needs” upon construction, it was administered by a businessman who was both optimistic and idealistic. Real estate investor Edwin W. Herrick sought to “cultivate the public taste for music and to elevate the moral standard of the drama” in the city. 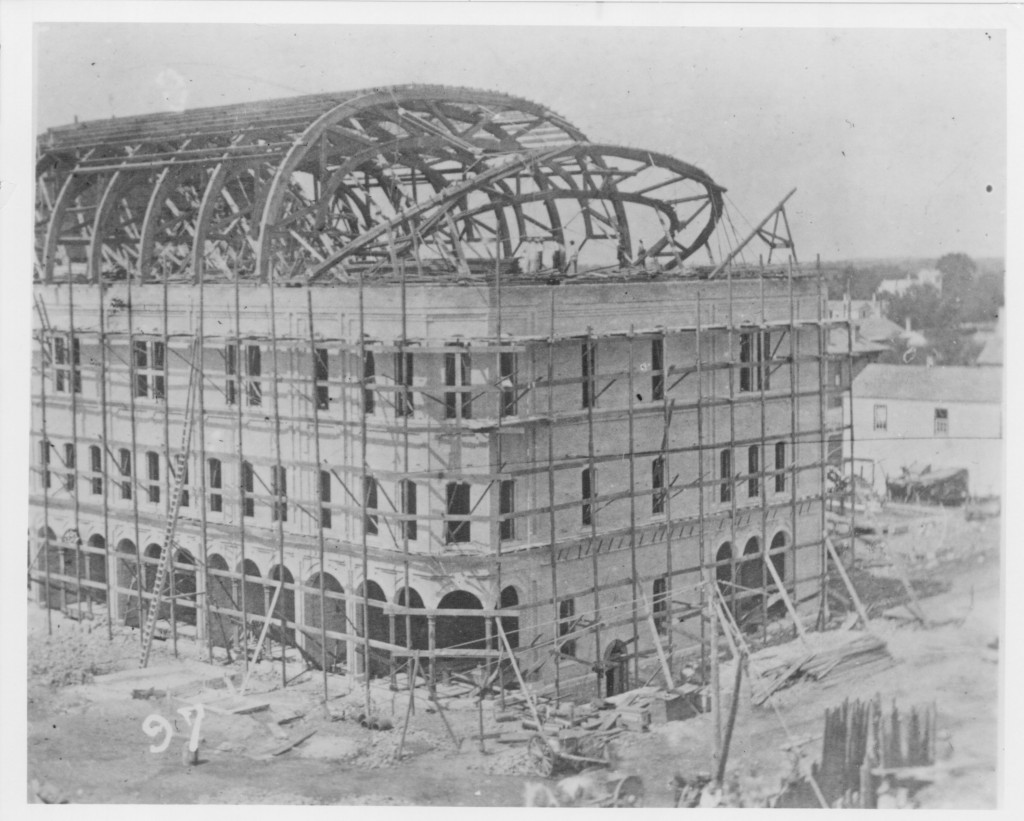 The Academy faced stiff competition from a raft of “variety theaters” in the same neighborhood. These establishments, which began operating in the 1870s, blurred the lines between theater, bar and brothel. Catering to the large population of unmarried men who spent part of each year in this neighborhood by the Mississippi River, businesses like the Theater Louvre and Theater Comique helped seasonal workers pass the time–and spend their accumulated savings–between jobs in the lumber or railroad camps.

Located off this map on First Avenue South, Theater Comique was the leading purveyor of this type of entertainment. It prospered through a time-tested formula that paired bawdy stage shows with rivers of liquor and mountains of tobacco. “Vice is rampant at the notorious Theater Comique,” the Penny Press fulminated in 1894, decrying the theater as “a constant menace to the community from a moral and sanitary point of view.” Twenty years after its establishment, the thriving theater was more troubling than ever, according to this editorialist. “The dive, always bad and degrading, has been sinking steadily year by year, until now it is the vilest place in the whole city, and the orgies carried on would make even the most depraved and hardened inmate of the lowest bagnio [brothel] blush.”

The Academy of Music made city leaders proud. But in contrast to the Theater Comique, it failed to make money. Perhaps coincidentally, the Academy burned in a spectacular fire on Christmas Day, 1884, when firefighters were preoccupied with their holiday dinners. The next year, Herrick refurbished the Academy block not as a fine arts theater but as an office building, a use that proved far more profitable for its owner. 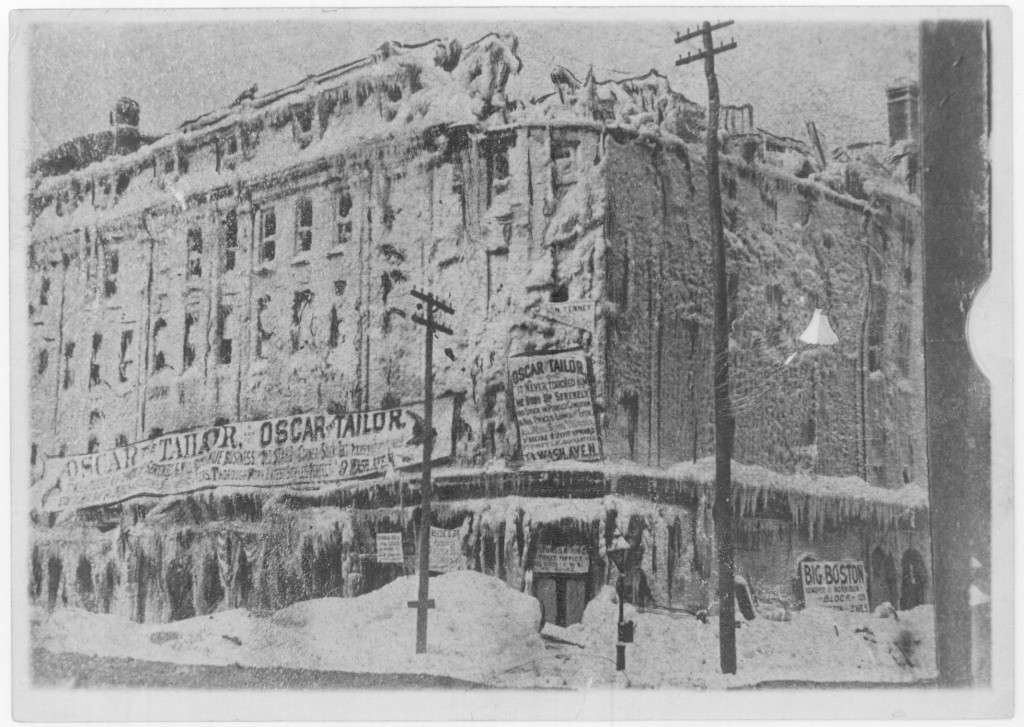 After the fire at the Academy of Music, Christmas Day, 1884. Hennepin County Library Special Collections.