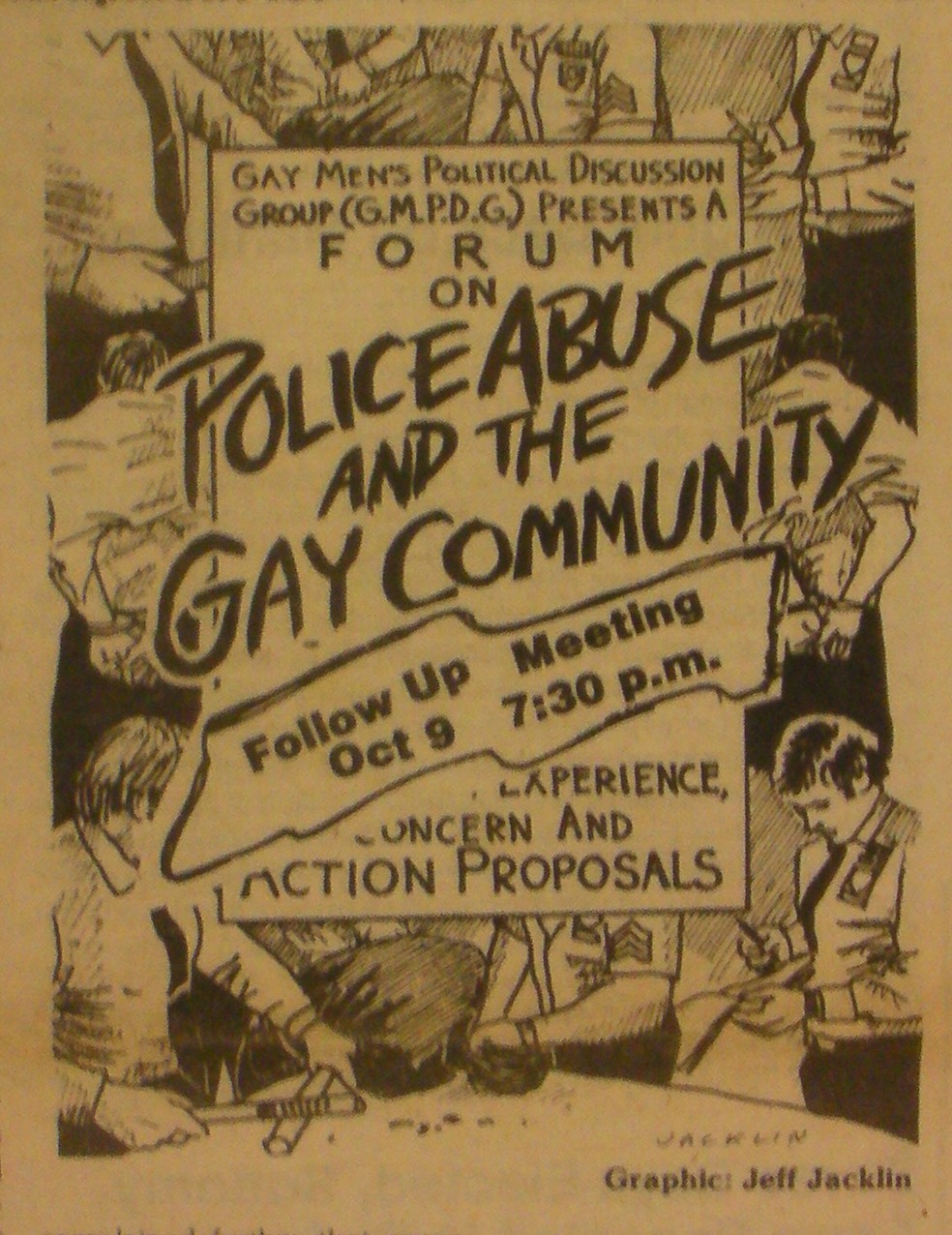 This week I had the privilege of hearing the senior thesis defense of  Kevin Ehrman-Solberg, an Augsburg College senior and history major who has worked over the last year as an intern for this project.

Kevin has been a familiar presence on this blog. Many of you have enjoyed his work on sewers, a topic that few of us realized could be so interesting. He has mastered digital tools that have allowed us to bring you our Hennepin Avenue panorama and our Washington Avenue Then-and-Now slider.  Kevin has also shared his research on feminism, gay liberation and the battle over pornography that roiled Minneapolis in the 1980s.

For his honors thesis, Kevin wove some of the insights he presented here into a longer piece he called “The Battle of the Bookstores and Gay Sexual Liberation in Minneapolis.” It chronicles the conflicts between gay activists and the police department in Minneapolis between 1979 and 1985, when thousands of men were arrested for using pornographic bookstores to have sexual encounters with other men. These arrests galvanized the gay community to exert pressure on City Hall, where activists and politicians forced the mayor and the police department to stop the harassment of men who were using these spaces to explore consensual, same-sex desire.

This is history that matters, for so many reasons. First, it is critical for our community to reckon with the tragic effects of this police harassment.  Arrests were a matter of life or death for many of the targeted men, who had not chosen to identify as gay. One of the most devastating stories uncovered by Kevin is that of the Reverend James Santo, who set himself on fire in the basement of his Hopkins church rather than face his family and congregation after his arrest in a bookstore on an indecent conduct charge. And many of these men were not only arrested, but also were beaten by police, brutality that was chronicled at the time by crusading journalist Tim Campbell in the radical GLC Voice.

This work also challenges a sanitized narrative of gay liberation, which posits that this movement focused solely on the right to be protected from discrimination and led inexorably to marriage equality. “The Battle of the Bookstores” makes the question of sex central. It illuminates how gay political mobilization was animated by the desire for sex that did not conform to heterosexual social norms. While the gay press gave generous space to this struggle, it was a topic that mainstream daily newspapers chose to ignore. Though silence on this subject literally meant death for some people, establishment journalists were at a loss on how to write about dissident sexuality for a wide audience during the 1980s.

And finally, after a week of the #pointergate controversy that illuminates police rank-and-file rage about body cams and the seemingly unbridgeable divide between officers and the city’s mayor, this history underscores both the difficulty and the importance of civilian oversight of law enforcement. While most Minneapolis police officers bring a devotion to public service to a dangerous and often thankless job, the department has frequently clashed with the politicians expected to be its watch-dogs. Contemporary police union leaders have sought to discredit Mayor Betsy Hodges, an outspoken advocate for police reform. In the 1980s, by contrast, the Minneapolis Police Federation focused its ire on police Chief Tony Bouza. “The Battle of the Bookstores” recounts how attempts to reign in rogue officers sparked a “Dump Bouza” campaign that labeled the New York City native a “carpetbagger” and a “faggot.”

For the last sixty years, the department has been dogged by often contentious relations with the communities it is sworn to serve. It drew national scrutiny in the 1940s, when inadequate and abusive policing of the Jewish community on the city’s North side prompted a group of rabbis to threaten to start their own street patrol. And perhaps most famously, police harassment and brutality in South Minneapolis inspired Native American activists to establish the American Indian Movement, which changed perceptions and policies towards Native Americans across the United States.  The clash over gay-bashing in the 1980s chronicled in the “Battle of the Bookstores” is part of a longer history of the police and civil rights in the city.

Please join me in congratulating Kevin for all of his accomplishments. Through his senior thesis and his work for Historyapolis, he has already left his mark on the history of Minneapolis. This is merely the beginning of an impressive career that all of us at Augsburg will be watching with pride.

The illustration for this post is from the October 1, 1984 issue of the GLC Voice.