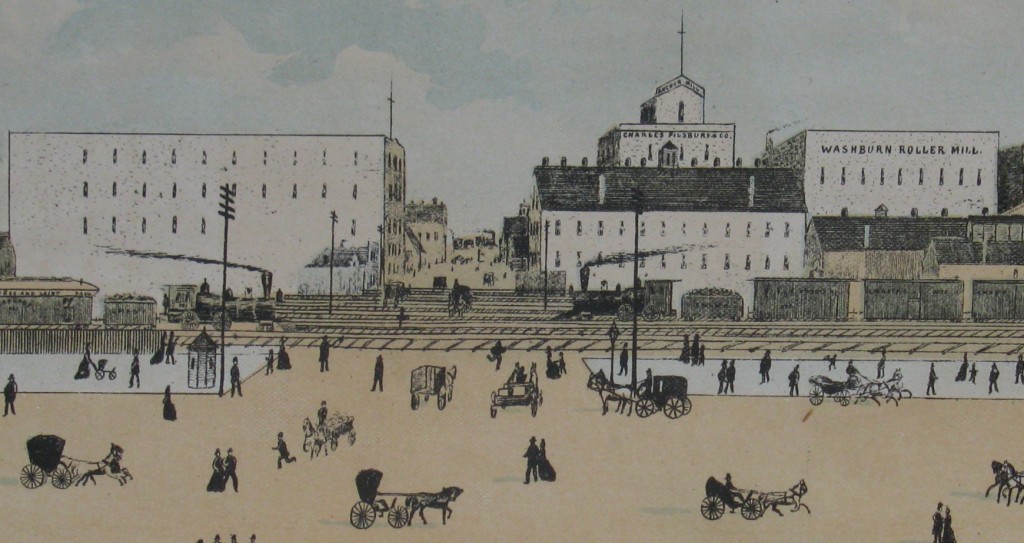 The Minneapolis milling district at Washington Avenue and Sixth Street South. Click on the image to start the interactive tour.

Last month, the Historyapolis team constructed a “then-and-now” visualization of the southern side of Washington Avenue. The historical images were culled from The Business Heart of Minneapolis, a promotional book from 1882 that we found this summer in the collection of the Hennepin History Museum. We juxtaposed these drawings with modern imagery to give a street level view of Washington Avenue from Eighth Street South, to Fourth Street North. Now, we are presenting the northern side of the street.

As we explained in our earlier post, this book was commissioned by civic boosters to advertise the city’s prosperity. A nineteenth century marketing gimmick, this volume portrayed Washington Avenue (the business “heart” of the growing city) though a hand-drawn panorama that folded out accordion-style. Laid on the floor of the Hennepin History Museum, this delicate drawing stretched ten feet long and presented a carefully constructed image of a clean and orderly metropolis.The goal was to lure new investors to the “Gateway of the Northwest.”

This promotional volume gave no hint of the street’s impending transformation. Twenty years after these images were created, Washington Avenue was known as saloon row. One-third of the city’s drinking establishments were located along this commercial artery, which became the backbone of one of the nation’s largest skid rows.

The nineteenth century architecture of Washington Avenue was one of the casualties of the city’s redevelopment (i.e. demolition) of the Gateway District in the late 1950s. As this visualization shows, few of the historical structures remain. An exception is the building on the corner of Washington and Third Avenue North. Now serving as the offices of Edina Reality, this structure used to house a leather shop as well as Clark and Mackroth’s Agricultural Implements. One block down—on the corner of Second Avenue North—the old Loury and Morrison Block is also still standing, although it is currently vacant and boarded. Besides these two brick stalwarts, however, little remains from the days when Washington Avenue was the “Business Heart of Minneapolis.”

Special thanks to Sarah Peterson for her help in compiling the current street-level imagery. And thank you as well to the generous staff of the Hennepin History Museum, who allowed us to bring this source into the digital realm.