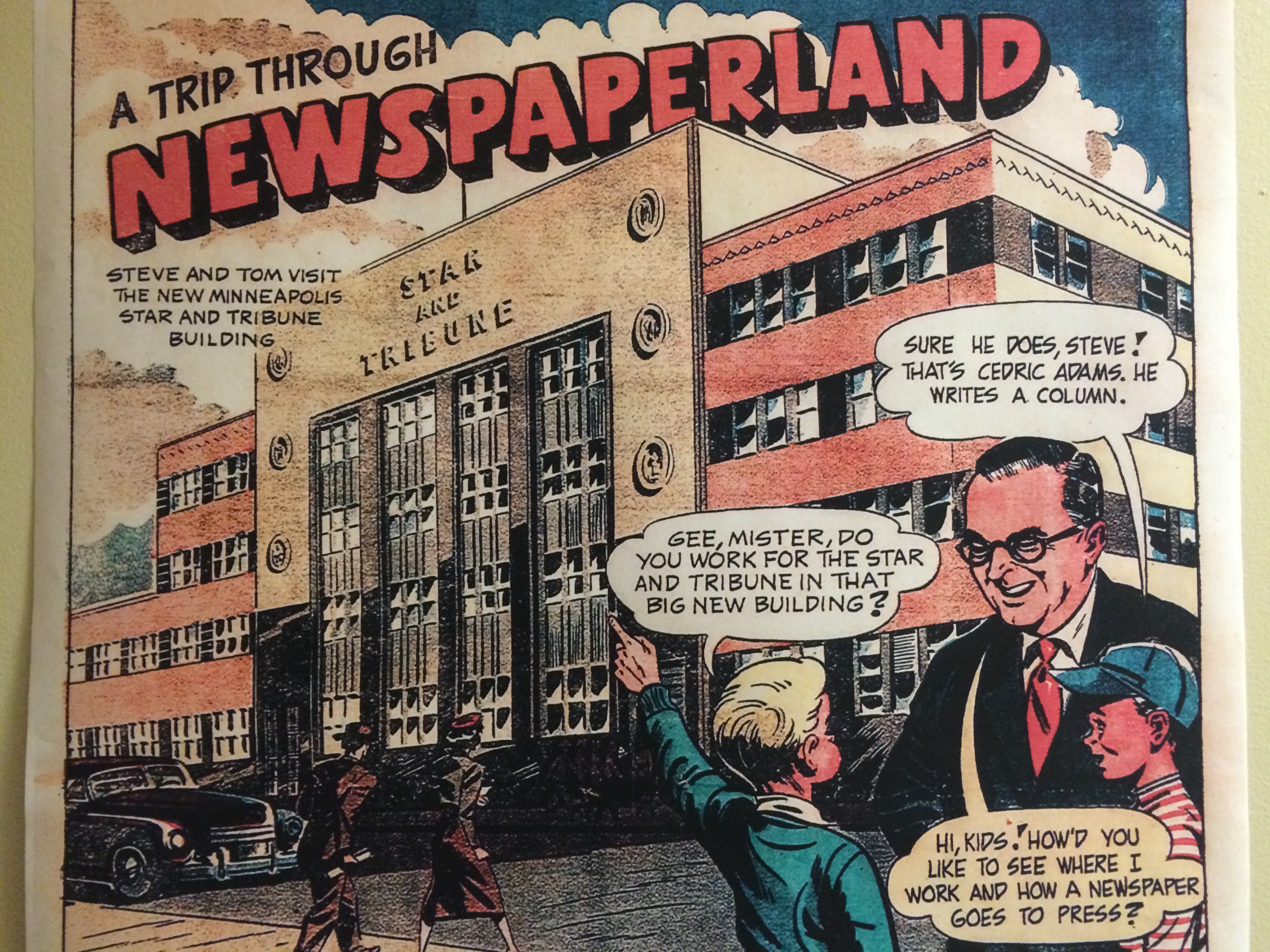 In 1949, the Star Tribune brought the bling to 425 Portland Avenue with a Hollywood-style extravaganza that celebrated the unveiling of its state-of-the art editorial and printing facility. 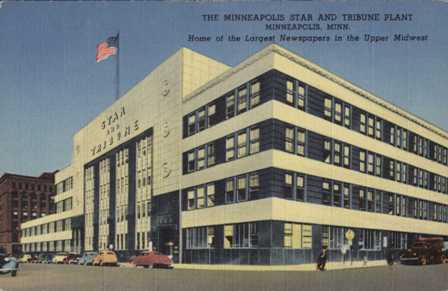 This comic, which offered a graphic tour of “Newspaperland,” was produced for the event. 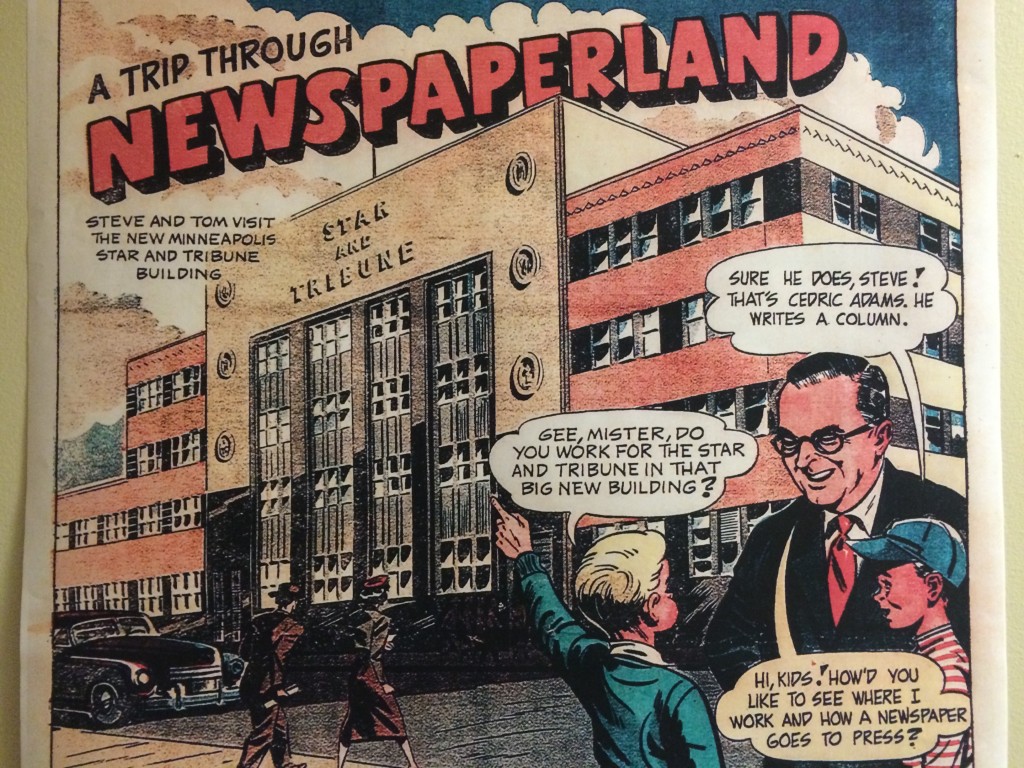 A trip through “Newspaperland,” 1949. Courtesy of the Star Tribune Company.

And readers were invited to star gaze at visiting celebrities. Legendary boxer Jack Dempsey, singing cowboy Gene Autry and the Swedish ambassador all came to town for the fun.

None of that glamour is in evidence today as the publication prepares to vacate what is now an obsolete building. At the end of this week, newspaper staff will move to new offices in the center of downtown. By this summer, 425 Portland Avenue will be demolished to make way for the Downtown East development surrounding the new Vikings stadium.

Sixty-six years ago, spotlights drew visitors downtown to participate in its lavish tribute to a “newspaper in a free society.” They enjoyed a “Cavalcade” and a “Parade of Champions.” They cheered the return of paper carrier Donald Olson, who delivered the Sunday newspaper to 14 countries “round the world.”

This was the hey-day of print journalism, when the Cowles media conglomerate enjoyed a near newspaper monopoly in the upper Midwest. 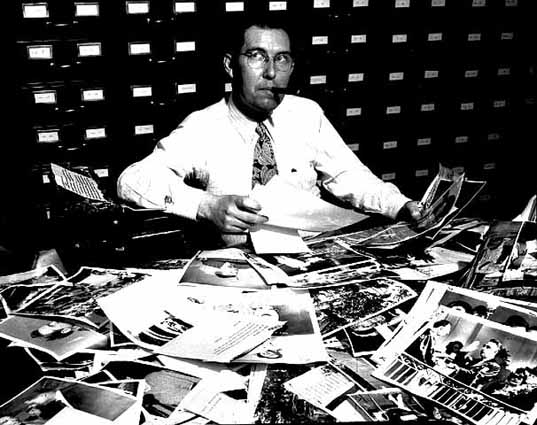 Editor or reporter at the Star Tribune c. 1947. From the Minnesota Historical Society.

Today, those hoping to catch a last glimpse of the storied newsroom are greeted by a fleet of recycling bins. A massive purge is underway. Sixty years of accumulated paper must be culled to fit into a manageable number of moving cartons.

As with any move, some decisions were easy. But others were wrenching. One dilemma was the subterranean “clip room.”

Back in the day, “clip files” were central to all serious news operations. A staff of scissors-wielding librarians made these files into the repositories of institutional memory. The newspaper was dissected each morning; each article was clipped and sorted into topic files. On any given day, the topics were diverse: Squirrels; Spring; Sixth Amendment; Quality of Life; Pornography;  U.S. Foreign Policy–Palestine. Every person and every business mentioned in the newspaper had a file. Each envelope  contained everything published on a given subject from the 1940s to the 1980s. 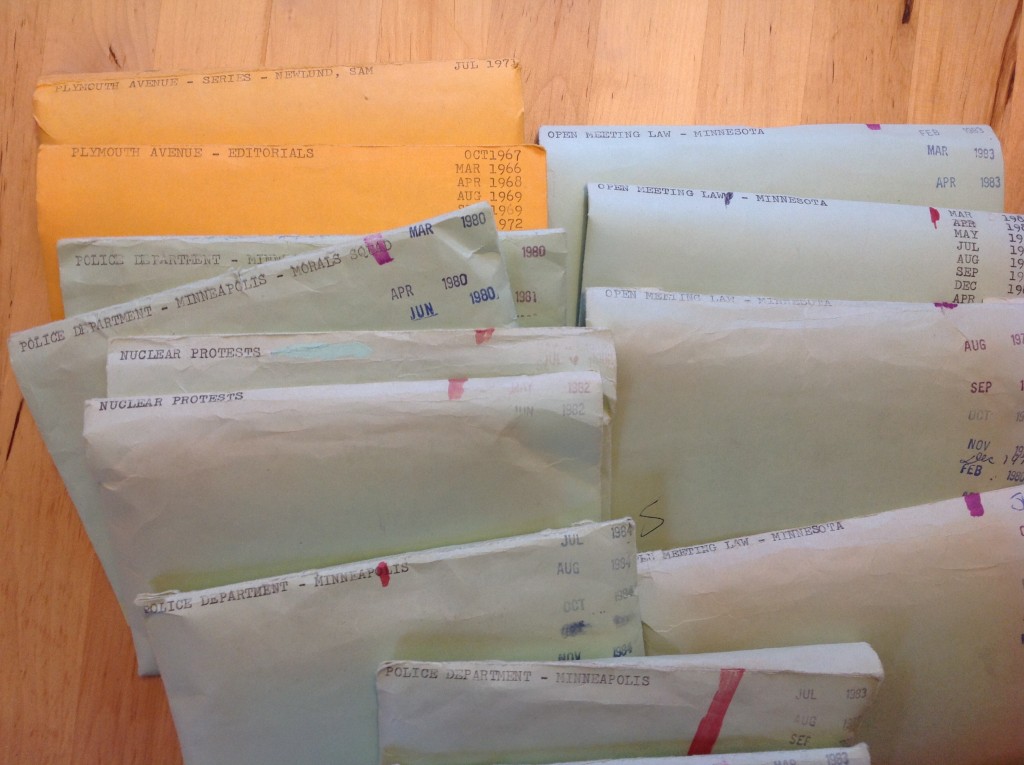 For decades, the clip files were the first stop for a reporter starting a new story. This routine began to change in the 1980s. Searchable databases came into use; but they were of limited value for years since they never went back that far. Which meant that most reporters continued to trek to the clip room for background on big stories.

But as the digital archive grew, the clip room diminished in importance. And then–like the train tracks that used to transport huge rolls of paper through the basement of 425 Portland–it became a vestige from an earlier era of journalism. Only the most historically-curious journalists regularly took the elevator to the basement to rummage through these files, which were stuffed full of crumbling newsprint articles.

For most daily journalists today, anything before 1990 is ancient history. So the announcement that the clip room would not make the trip when the newsroom changed venues was no surprise.

The clip files were peripheral to the daily operations of the newspaper. But they still hold tremendous value for researchers interested in the past. So Star Tribune librarians Sandy Date and John Wareham contacted Ted Hathaway and Bailey Diers at the Minneapolis History Collection at the Hennepin County Library. The newspaper worked with the library to craft a legal agreement for the transfer of the material. A little more than three weeks ago the librarians organized a team (which included me) that tackled the Herculean task of selecting files relevant to the history of Minneapolis. After packing them into boxes, they returned several days later with a truck to transport them across downtown.

Today this material has a new home in the Special Collections Department of the Minneapolis Central Library where they are available to the public. Thanks to the Star Tribune and these civic-minded librarians, this legacy from the golden age of print journalism has been preserved. This corporate asset has become a community resource. Anyone can now make use of the material that informed generations of journalists and reflected countless hours of clipping and classification.

So if the demolition of 425 Portland Avenue makes you feel nostalgic, treat yourself to a visit to the Minneapolis History Collection. The end of the Portland Avenue era for the Star Tribune has created a valuable source for those interested in exploring the past as it was shown in the pages of the daily newspaper.