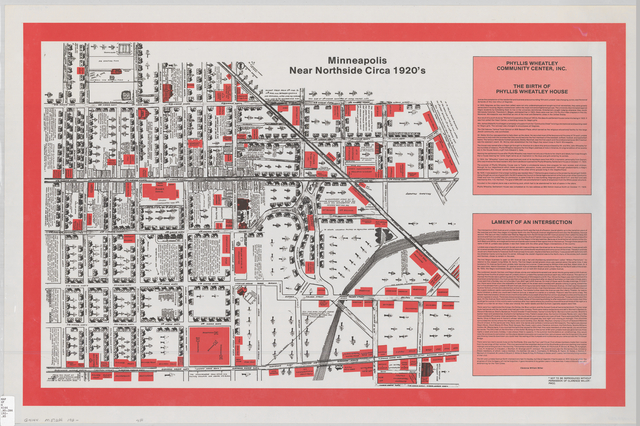 It’s map Monday. Today we’re revisiting one of my favorite sources for Minneapolis history. Sometime in the 1950s, this “memory map” was created by Clarence Miller to document an area of the near north side that had been recently flattened by urban renewal. The original map–which hangs on the wall at Sumner Library–shows the buildings, businesses and clubs that clustered around 6th and Lyndale Avenue North in the 1920s. In this area, newly-arrived African Americans lived beside Jewish immigrants from Eastern Europe in a district known throughout the rest of the city for its rough tippling houses, jazz music, barbeque joints, brothels, kosher groceries and synagogues. This was the only part of the city where mixed-race couples or groups could be sure they would be served together in a restaurant.

The area has been immortalized in the prose of Gordon Parks, Nelson Peery and W. Harry Davis, who all came of age in this socially rich but economically impoverished district of town. The map complements these sources, illuminating the built environment that shaped all three of these men into fiery advocates of social justice. Over the last year, both Daniel Bergin and I have written about this fascinating document. Now you should check out how University of Minnesota archivist Kate Dietrick used this source to create a create new online exhibit. Kate annotated the original map with some complementary sources. Can you help her identify additional photographs, oral histories and other documents that tell us more about this important neighborhood?