It was the summer of 1922 on the near North Side of Minneapolis. After three nights of racial unrest, a group that called itself the National Equal Rights League issued a call for action. This ad-hoc committee asked the community to gather for a “Citizens Meeting For Public Safety” at the Elks’ Hall on June 25. The notice in The Minnesota Messenger declared that “the clergy and all prominent Negroes are invited and expected to be present to make a demand for justice and law enforcement.”

The topic for discussion: the ongoing and often violent clashes between the police and the African American community.

The area around the Elks’ Hall–which was located at the intersection of Sixth Avenue and Lyndale Avenue North– was one of the only places where African Americans were welcomed in Minneapolis during the 1920s. African Americans–who would comprise only one percent of the city’s population by the end of the decade–were struggling to gain a foothold in a city where popular support for the Ku Klux Klan was surging. Jobs were scarce and housing conditions were deplorable.

Police were regarded as one of the hazards of the street in this mixed-race neighborhood of juke joints and pool halls. But in the week before the meeting at the Elks Club, anger erupted over the behavior of law enforcement, which seemed more concerned with upholding white supremacy than ensuring public safety. “Law abiding Negroes ,” they declared, “demand their rights and should not be made to suffer for the acts of prejudiced policemen and reckless and vicious characters regardless of race.”

In the very early morning of June 19th, 1922, a police officer appeared on Lyndale Avenue North. Officer Fitzpatrick–who bystanders described as drunk– declared that it was time for the crowd to go home. His first concern was a group of men who “had just invited some white girls up to a dance” at the Elks Club. When the men ignored his order to “move on,” he assaulted them and threw them in a waiting paddy wagon. He then called headquarters for reinforcements, warning that a “riot” was about to erupt.

The night after Fitzpatrick made his “riot call,” another police officer assaulted a man several blocks away. “After complaints had been received” that a black man was “speaking to white girls,” Officer McNamee approached the man and tried to arrest him for “disorderly conduct.” When the man tried to escape, the police officer fired his gun four times.  He missed his target, who grabbed the gun and disappeared into the crowd of onlookers. McNamee called for back-up from the police “gun squad.” The man escaped capture but the neighborhood came under siege. Police patrols were redoubled and businesses were forced to close their doors, in the interest of public safety.

The city’s fledging civil rights movement mobilized in response to these outrages. “There is no excuse for a police to serve notice that he intends to clean out all the Negroes by threats of killing them,” the notice in the Minnesota Messenger declared. “A NEGRO CAN GET JUSTICE IN THE COURTS OF THIS CITY BUT MANY OF THEM SUFFER SEVERE CRUELTIES BEFORE THEY REACH THEM.”

Despite this fiery message of defiance, the protest meeting on the 25th was tame. The president of the NAACP expressed his desire to “take proper steps to better race conditions” and his group was charged with pursuing negotiations with the city. During the weeks that followed, leaders of the NAACP met with city officials, including Mayor George Leach, who would himself become the target of the Ku Klux Klan in 1923.

The group would pressure the city to increase the number of African American women on the police force. But ultimately these talks would yield little else in the way of real improvements.

In the intervening years, the landscape of race has been transformed in many different ways. Despite legal, economic, political and social changes, relations between African American residents of the near North Side and the Minneapolis police have remained deeply troubled. 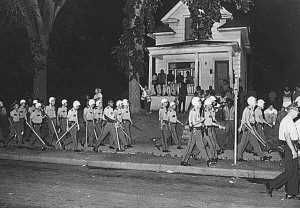 Minneapolis police in North Minneapolis, responding to the urban unrest in the summer of 1967. Photograph from the collection of the Minnesota Historical Society and the Star Tribune.

As we grapple with the shooting of Jamar Clark, this history matters. The near North Side has been shaped for most of this last century by this legacy of mistrust, which cannot be dissolved overnight.  Clark’s death has summoned this difficult history, unleashing anger and fear that will be difficult to contain without confronting the past.