It’s map Monday. And here we have a cartographic guide to the second Aquatennial festival, which was held July 20-28, 1940. The Aquatennial was conceived as part of the long-running effort by political and business leaders to remake the image of the city, which had been battered by violent labor strife, municipal corruption and racial violence in the first decades of the twentieth century. The festival was part of the drive that took shape in the late 1930s to create a new “City of Lakes” from the ruins of the Mill City.

Aquatennial organizers claimed that they had slated their new celebration of the lakes for the third week of July because that was usually the hottest and driest week of the summer. But labor organizers always suspected that the glitzy new festival was intended to overshadow their commemorations of the Teamsters’ Victory in 1934, which were traditionally held this same week. This may have been the case, but the Minneapolis Park system had been convening festivals and pageants on their lakes and gardens since the early part of the twentieth century. Pageants that re-enacted historical events or featured children in animal costumes had been an important ritual of summer in the city for decades before the Aquatennial began.

Modern Aquatennial participants enjoy sand castle contests and the venerable milk carton boat races. According to this map, in 1940, festival goers rode the streetcar to Children’s Pow Wows; the Paul Bunyan Canoe Derby; Casting Contests in Loring Park; a Song Fest in Powderhorn Park; one of Alice Dietz’ lavish children’s pageants in the Rose Garden; and in a nod to religious inclusivity in a town known for its anti-Semitism, an “Out of Door Temple Service.”

Map is from the collections of the Hennepin 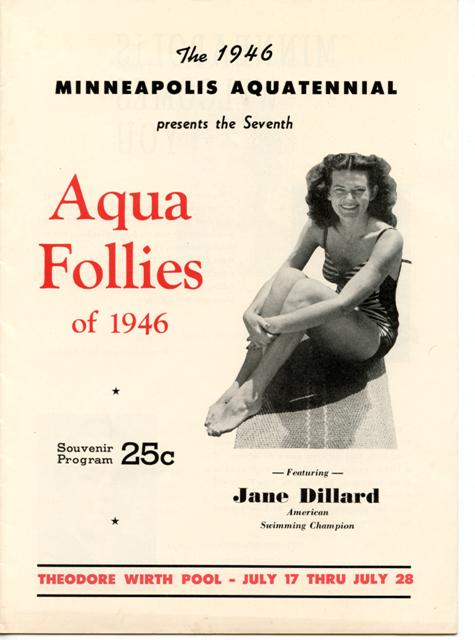 By the late 1930s, Minneapolis was on the skids. The city’s industries were in decline and the community had developed a national reputation for ethnic and labor conflict. The Teamsters’ Strike of 1934 was a pivotal moment for city leaders, who resolved to work together to re-brand the Mill City as the City of Lakes. The Aquatennial Festival was launched in 1939 as part of this broader public relations effort. The lavish Aqua Follies–held each year at Thedore Wirth Pool in Wirth Park–was the centerpiece of this glitzy civic extravaganza. Here we have the cover from the Aqua Follies program from 1946. Image is from the collection of the Hennepin History Museum, which has the most extensive collection of Aquatennial material in the city.