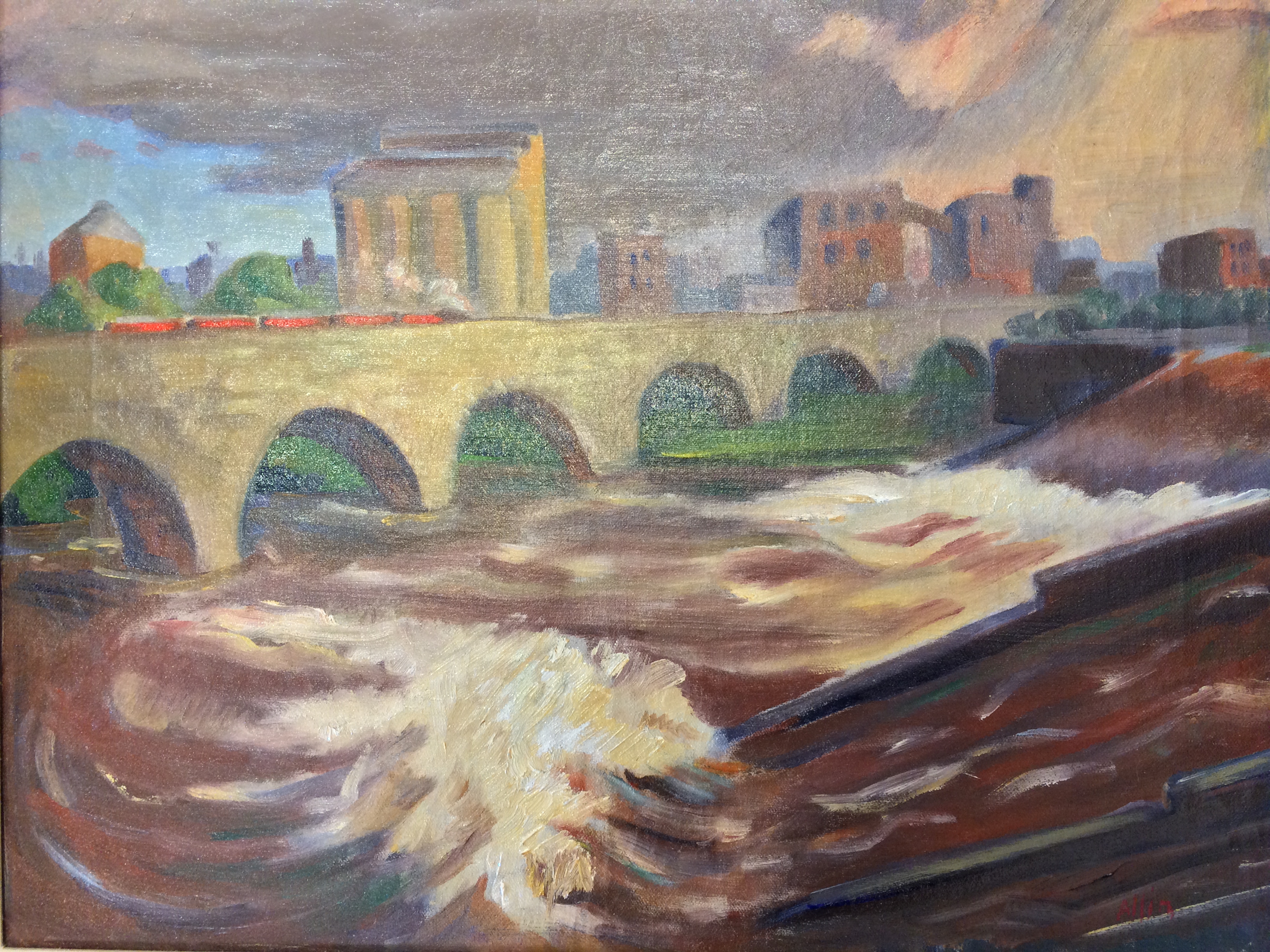 Today’s guest blogger is Bill Wittenbreer, a founding member of the Historyapolis Lab at Augsburg College. In 2002-3, Bill co-curated an exhibition at Minnesota Museum of American Art called An Artist’s Paradise: Minnesota Landscape Painters 1840-1940. Here he profiles Martha Washburn Allin, a painter and watercolorist who made art in Minneapolis from 1926 to 1946.

Martha Washburn Allin was not related to the Washburns of milling fame in Minneapolis; if she were, we probably would know about her today.  During her lifetime, Martha was probably a fairly well known artist in Minneapolis art circles because she frequently exhibited her paintings in shows at the State Fair, University of Minnesota and the Art Institute.  These venues were popular with amateur artists like Martha. With the exceptions of Frances Cranmer Greenman and Jo Lutz Rollins, there were very few women in Minneapolis who were considered to be professional artists.

Martha was born in Minneapolis in December, 1888.  Her father was head of the University of Minnesota’s Entomology department from 1902-1918.  Martha graduated from East High School in 1906 and attended the University of Minnesota for a year before she transferred to Smith College and graduated in 1913.  Martha returned to Minneapolis after graduation. In 1917, she married Cephas Daniel Allin, a professor of Political Science at the university. Martha and Cephas had three children; Vincent, Roger, and Frances.

In 1924, Martha began her art studies.  She studied with Professor Samuel C. Burton at the University of Minnesota.  Burton was head of the studio arts department and professor of fine arts and architecture.  Burton was a painter himself and impressionism was his preferred style.  Martha must have been a quick study.  Two years after her first lesson, Martha had a piece included the 12th Annual Exhibition of Minnesota Artists at the Minneapolis Institute of Arts.  Martha’s piece was called A Gray Day. Gray Day was a view of the lake in Loring Park with church steeples in the background.  Martha did not win any awards at this exhibition, but it was her first exhibition of many.

And this exhibit became fodder for the public relations campaign waged after Sinclair Lewis published Babbitt, a scathing novel the portrayed Minnesota as a backwater of hopeless provincialism. A writer in the University of Minnesota Alumni Weekly asserted that this collection of art work challenged Lewis’s characterization of the Midwest. “Minnesotans Provincial?  It’s a charge that has been brought against us when one of our most red-headed novelists selects Minneapolis as the native haunt of Babbitt,” the magazine ruefully admitted on October 30, 1926. ” If you, too, are smarting a little under the sting of this accusation, we suggest that you Ford or ankle out to the Minneapolis Art Institute where the Twelfth Annual exhibit of work by Minnesota artists is on display.”

Martha continued to paint and exhibit until her death in 1946.   She entered her work in the Fine Art Exhibition at the State Fair nine times. Her work was included in four exhibitions at the Minneapolis Institute of Arts and several shows at the University of Minnesota.  Judging from the titles of her work, she preferred landscape and painted in oil or watercolor.  In the 1940s, the State Fair Exhibition had a special section on St. Croix Landscapes and it included paintings by Martha.

Little of Martha’s work is extant, but one of Martha’s paintings, St. Anthony Falls, is in the collection of the Stillwater Public library. This painting–shown here– suggests that Martha was quite comfortable with the techniques of impressionism: the quick, sketchy brushwork; the forms that are blurred; and her use of light to reflect off the water and the splash from the Falls.

The image comes from the Stillwater Public Library. And the material for this post came from  The Minnesota Alumni Weekly October 30, 1926 No 6 and Rena Neumann Coen, Minnesota Impressionists (Afton, MN: Afton Historical Society Press, 1996).