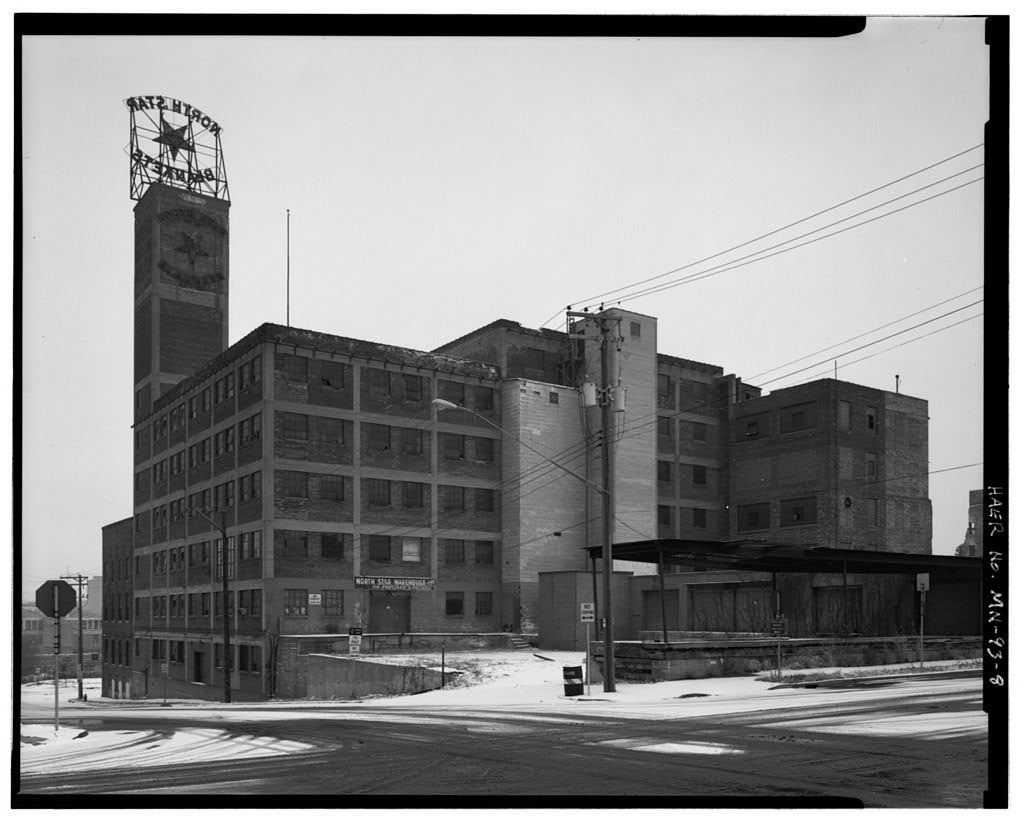 Today’s guest blogger is Tamatha Perlman, a writer and museum professional, who is working on a book about murder, madness and unrequited love in 19th century Minneapolis. In this post she describes the working conditions of women in the Mill City, using the work of labor journalist Eva Gay to bring readers to the weaving floor of the North Star Mill. The image above shows the North Star Woolen Mill building, which still exists in downtown Minneapolis.

Sunlight made a spotty appearance through the garden level windows in the basement of the North Star Woolen Mill. Tucked in the back of the large room, behind the men operating the dryers, women washed the blankets finished on the floors above.  In 1888, for 90 cents a day, women of all ages operated massive “gigs,” washing vats filled with scalding water. The hot air was thick, hovering around 98 degrees. The stench of wet wool and lye clung heavily to the heat. It was something, the girls said, you got used to after a while.  Opening the windows in the mill–located near Sixth Avenue South in Minneapolis–was out of the question. Dirt kicked up from the street would stick to the blankets. Washing and drying them once was enough.

Weaving was skilled work. It took endurance to perform and patience to learn. A women hoping to learn had to rely on a friend good enough to sacrifice a few days’ wages to teach her. Weavers were paid by the piece and a good weaver could make up to $1.35 a day. Factory foremen did a final count each day, rating each piece for quality to see if it would be counted for payment.

The weaving floor at the North Star Mill was immaculate, a fact that always impressed factory visitors. They remarked on the way that light streamed through large windows and gleamed off whitewashed walls. What they did not realize is that these young weavers were expected to clean over the lunch hour. Employers were able to exploit the fact that relentless work kept mill girls from becoming too close to one another.

Life in the woolen mills was a short term prospect. Most weavers could not work year-round. Many women could only work three or four years before being forced to find other employment after succumbing to repetitive stress injuries. Others had back pain from standing at the heavy looms for ten hours a day. “Some get married, some go to the hospital, and we don’t know anything about many of them; they just drop out and others take their places,” one of the young women explained.

Despite these grueling conditions, mill owners had no shortage of willing workers. In the last quarter of the nineteenth century, women were streaming into Minneapolis from farms and overseas. These jobs required little experience with machinery and no proficiency in English. Employers had little regulation. They had only their conscience to dictate how much they worried about workplace safety or comfort.

“Do you think it’s worth while to ruin your health by working in this place for such wages?” a reporter asked a gig operator in an 1888 interview.

“I don’t know as it is,” was the wary reply; “but when a girl’s got her living to earn she can’t choose where she’ll work.”

Quotes are taken from newspaper articles by Eva Gay that were published in the St. Paul Globe in 1888. The image is from the Historic American Landscapes Survey (HALS) at the Library of Congress.