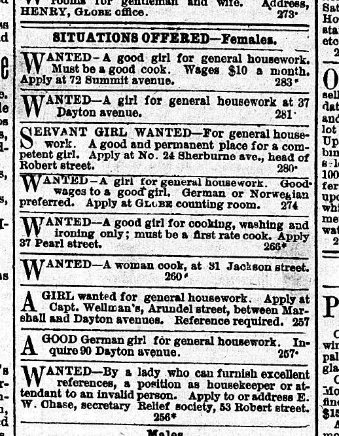 Today’s guest blogger is Tamatha Perlman, a writer and museum professional, who is working on a book about murder, madness and unrequited love in 19th century Minneapolis. Here she introduces readers to a young Irish girl named Kate Noonan, who became a servant for a prominent Minneapolis family while barely in her teens.

In 1878, the Daily Globe of St. Paul was filled with want ads like the one above. Thousands of young girls flooded into the growing city in search of economic opportunity. While they might have envisioned finding employment in the city’s expanding mills or factories, many ended up answering queries like these. For young, under-educated girls in the big city–especially immigrant girls like Kate Noonan–work in domestic service was the easiest to find. And least desirable.

Although they had food to eat and a place to sleep, these young girls were expected to rise by 4 or 5 am to make breakfast before starting on laundry and sewing. They worked with few breaks until 9 or 10 pm at night.

Kate first took this kind of position when she was a small girl. Her parents had immigrated from Ireland to Canada before the Civil War, moving to work on a farm in Minnesota after having children. Eventually the Noonan family found themselves settled in the East River Flats, which was nestled on the east side of the Mississippi River just south of the main milling district. It was here that the family encountered a priest who made them choose between faith and education. He demanded the children leave public schools, refusing communion to mother Margaret unless she enrolled them in Catholic school. Unable to send them across town, Margaret ended Kate and Abby’s formal schooling. The girls found themselves at a woolen mill when they were just eight and ten years old.

When Kate discovered that she could not withstand the physical demands of mill work she turned to domestic work instead. This type of work had its own challenges. Mistresses were imperious, shuffling servants in and out of their homes. Newspapers ran regular features condemning live-in help as a “troublesome element of humanity.”

But Kate met these demands, developing a sterling reputation among the city’s finest families by the time she was fifteen years old. One employer claimed, “all the girls are not of a gentle and good disposition; some are easily angered; Kate was not one of these.”

On rare nights out, Kate never missed an opportunity to have fun. Dressed in a black and white silk dress trimmed in velvet ribbon, Kate often attended dances hosted by the various societies around town. Most often she had a double date with Billy Dershon and her friend Kate Corchoran who, even Kate Noonan admitted “swore some and was saucy to men on the street.”

In most households on nights like these, the mistress would wait up for the help to arrive home. And woe to those who might have enjoyed themselves a little too much. Kate seemed to have avoided this type of scolding. But in the winter of 1877, she found herself in far more serious trouble.

On the evening of February 16th, Kate Noonan shot and killed her ex-lover Will Sidle on the corner of Nicollet and Washington Avenues. The trial of the young Irish domestic servant would ultimately divide the city, revealing an ugly underworld of urban danger and sexual exploitation.

Material from this post was taken from the Minneapolis Tribune, articles published in 1877 and 1879.