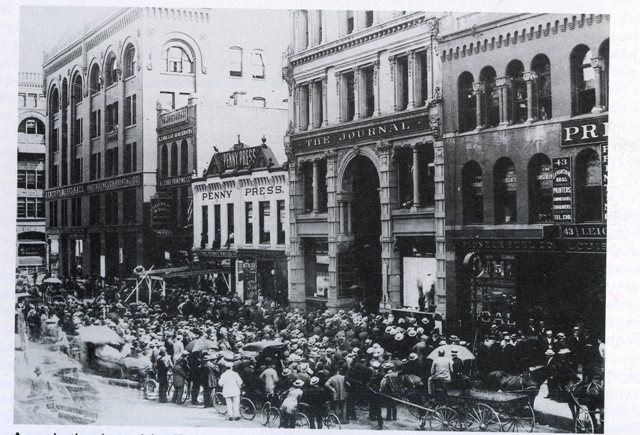 Long before the internet, before television and before radio, the media had a physical location in Minneapolis that everyone knew.  Fourth Street was the “Fleet Street” for the local press. Newspaper row–which included the Globe, the Minneapolis Journal, the Pioneer Press, the Penny Press, the Tribune, the Minneapolis Time, the Svenska American Posten  and Lund’s Topics in 10 Point–stretched from 1st Avenue North to 1st Avenue South, across Nicollet Avenue.  The marginal status of journalists was highlighted by the close proximity of newspaper row to the Gateway district, the city’s skid row neighborhood where all of the liquor businesses were concentrated. Until “the Newspaper Guild was born, salaries were low, raises infrequent, vacations brief and fringe benefits hardly worth mentioning,” according to Bradley L. Morison, an editor for the Minneapolis Tribune.  Morrison remembers Fourth Street to be dense with characters, a stretch where showgirls and literary types rubbed shoulders with professional journalists of varying quality. “Some were hard drinkers, some had no college background,” he recalls.  “There were ‘floaters’ and deadbeats among them.”

Henry Broderick remembers Fourth Street as an “al fresco forum, with hordes of debaters, mostly all talking at once, a bedlam of sounds and furies, coming from people aroused to a high pitch. . . When political campaigns raged, the entire street area on Fourth from Nicollet to First Avenue would be crammed with crowds, arguing the merits of candidates and causes. At times, the open-faced orators would, in a jiffy, turn into tight-lipped combatants.”  This photo shows a crowd gathered in front of the Minneapolis Journal, probably around 1900. Broderick described how “between editions of the papers, crowds looking for news would gather on 4th street to read the bulletin boards posted in front of each newspaper building. ” Newspaper row had disappeared by the 1940s, when the Cowles family moved the Tribune to its new building on Portland Avenue.  With this move, the newspaper removed itself from the hurley-burley of the city, trading bars and vaudeville houses for new neighbors that included the Armory and the adjacent General Hospital. Photo from the Minneapolis Collection, Hennepin County Central Library.