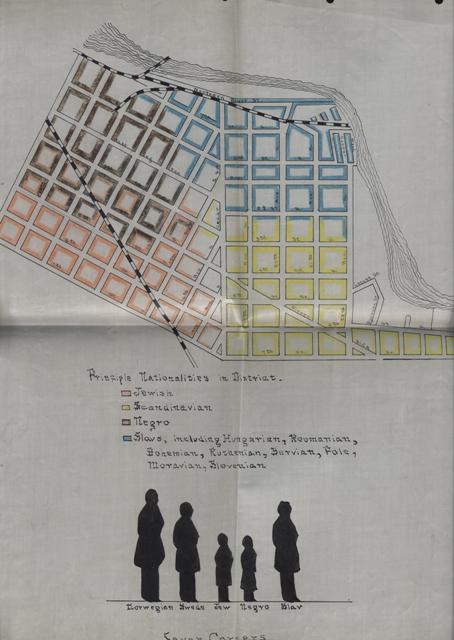 It’s map Monday. This map of the Seven Corners neighborhood was created in 1917 by Minneapolis librarian Josephine M. McPike, who had been directed by her superiors to do a community study of the neighborhood surrounding her reading room at 300 Fifteenth Avenue South. In a style familiar to fans of Calvin Schmid–who twenty years later would create hundreds of these types of maps of the Twin Citie…s for the statistical tome titled Social Saga of Two Cities –McPike used this map to illuminate residential patterns in the Sixth Ward, which was one of the most densely populated and diverse in the city.
The map was part of a larger report compiled by McPike, who was trying to ascertain “the needs of the neighborhood, and to what extend and how well we are meeting them.” But there was nothing perfunctory about her report, which included information gleaned from “newsboys, grocers, readers coming to the library, chance acquaintances.” She used “all excuses, such as overdue books, etc, visits to children’s parents on some pretext” in order “to gain the confidence of the residents and find out as much as possible of the district.”
Her seemingly benign mission met roadblocks at every turn since the “foreigner who has little knowledge of English and of American ways” is usually “unduly suspicious and sometimes hostile.” McPike reported being accosted by residents with shouts of ” ‘Spotter’, ‘Spy’, and ‘Detective’!”
The cheerful neighborhood librarian was undoubtedly viewed by residents of the immigrant neighborhood as an agent of the new Minnesota Commission of Public Safety. Organized on April 16, 1917, days after the United States entered World War I, the Commission was charged with maximizing the war effort on the home front. According to the Commission, Home Defense meant the persecution of labor radicals and immigrants. “It goes without saying that a state which has the right to use its strength to crush its foreign enemies can also protect itself against those at home whose behavior tends to weaken its war capacity,” the Commission explained.
It would have been the residents of Seven Corners–McPike’s neighborhood-who would have come under the greatest scrutiny. Controlled by  Socialists, it was one of the most diverse in the city. “In the immediate block of which Seven Corners Branch is a part, there are congregated three Scandinavian families four Jewish ones, two Bohemian, four negro, one Indian and one Roumanian family,” McPike explained.  “On the corner a Scandinavian Lutheran church holds services, and each Friday night at sundown the Orthodox Jewish church next door chants its rituals into our library windows. Variety is one thing we do not lack.”
Map is from the 1917 Seven Corners Library Community Study, Seven corners branch, branch library collection, Hennepin County Central Library. My thanks to historian Andy Wilhide, who first showed me this collection.