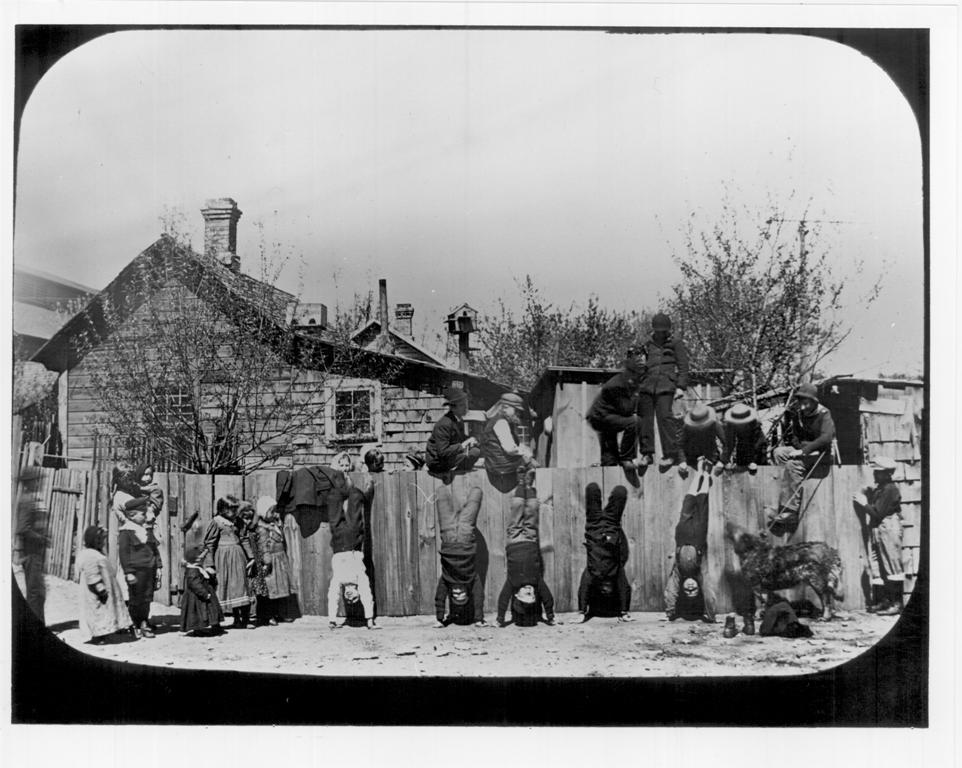 In the last quarter of the nineteenth century, when Minneapolis was in its infancy and housing was almost impossible to find  in the growing city, new Americans created a squatters’ village on the banks of the Mississippi River. Home to 1,000 people, this enclave was tucked beneath the Washington Avenue bridge and was accessible by a flight of seventy-nine wooden stairs descending from the top of the river bluff. 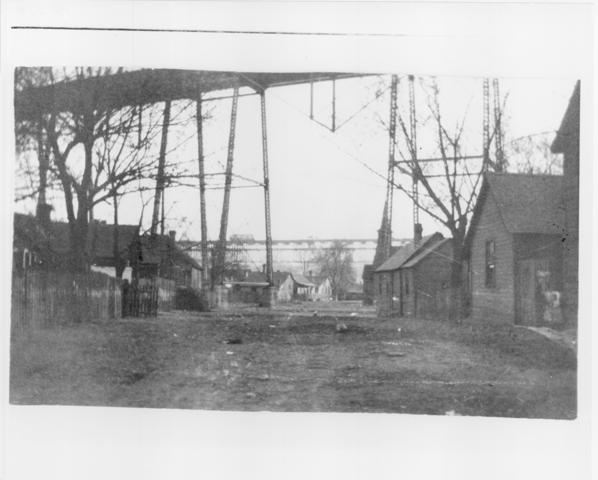 Though residents of the Bohemian Flats worked, shopped and worshipped above the bridge, outsiders imagined the community as a world apart, “a quaint little village nestled under the side of a cliff,” where migrants from Bohemia, Slovakia and Finland clung to European costumes and languages. It was adjacent to the city’s garbage dump and inundated by spring floods that forced families to decamp for higher ground each year. But living on the riverbank had its advantages for residents. Over the lifetime of this neighborhood, many on the “Upper Levee” transformed their shanties into substantial homes that furnished by “pianos, Victrolas, Brussel carpets and lace curtains.”

No physical trace of the community is visible today. It was cleared in two waves–first in the 1920s and then the 1930s–to make way for a new municipal freight terminal. 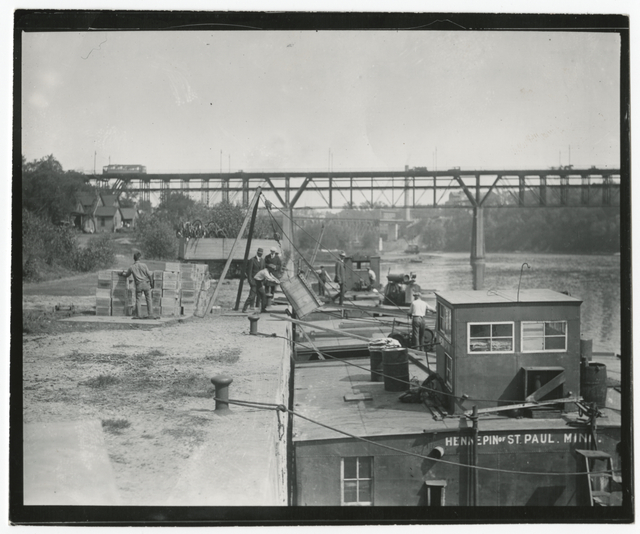 Image from the Minnesota Historical Society shows the Washington Avenue bridge and the new municipal freight terminal on the Mississippi River in 1925. The remaining houses from the Bohemian Flats can be seen in the far left corner of the image.

But the Bohemian Flats has been immortalized by writers and ethnographers who have been fascinated by what they perceived to be an insular little world. In 1921, the settlement provided the backdrop for The Boat of Longing, a saga of Minneapolis immigrants penned by Norwegian novelist Ole Rolvaag. And in 1935, the Works Progress Administration tasked a team of writers to document the immigrant community just as it was disappearing under the bulldozer. This effort attracted the attention of Joseph Zalusky, who became one of the first directors of the Hennepin History Museum. Zalusky helped to plot the social and physical geography of the neighborhood in its twilight moments, creating this map, which shows who lived where on the Flats in 1910. 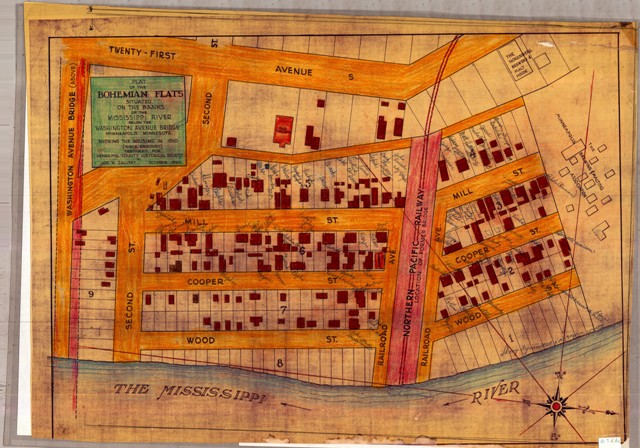 Social geography and streetscape of the Bohemian Flats by Joseph Zalusky. Map shows families in residence in 1910. Thanks to the Hennepin History Museum for sharing this source. And special thanks to Kevin Ehrman-Solberg for digitizing and wrangling this image so it could be shared online.

The material gathered by Zalusky and these early twentieth century ethnographers are part of the rich historic record that has captured the imagination of a new generation of Minneapolitans, who have re-discovered the neighborhood as part of their new embrace of the Mississippi River. Last year, Mary Relindes Ellis published a new novel set on the Bohemian Flats. And tonight, the Mill City Museum will open a new exhibit called “Remembering the Bohemian Flats: One Place, Many Voices.” This installation grew out of the work of Rachel Hines, a University of Minnesota graduate whose senior thesis inspired a new initiative to make this legendary settlement visible to a new generation.

This exhibit seeks to make sense of the dueling images of the neighborhood, which was portrayed both as a place of natural peace and a site of danger. The “Flats” were described as a riverine paradise at a bend of the Mississippi River, whose waters were heavy with sewage and industrial effluvia. Yet the river provided an “atmosphere of peace and to some degree quiet” for residents of the Flats, whose “pink cheeks and brown skin. . .glowed with health and vigor,” according to the neighborhood’s branch librarian.

The enclave’s undeveloped setting certainly had advantages for those interested in keeping vegetable gardens and goats to supplement meager wages. Inhabitants used the river to scrape out a subsistence existence, scavenging wood and anything else useful that might float past their doorsteps. 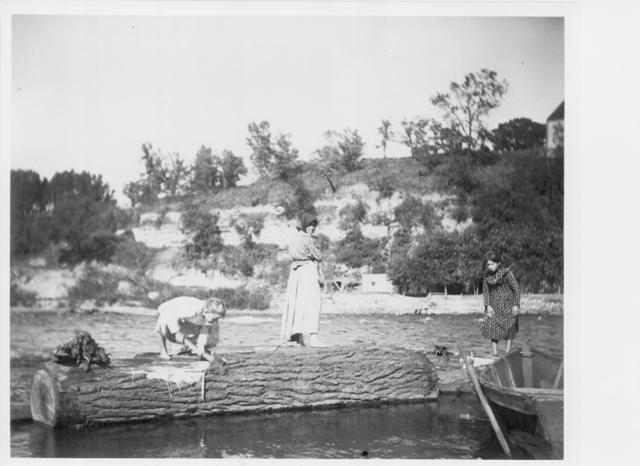 The women and children who lived in the Bohemian Flats helped their families survive by scavenging driftwood from the river. This image is from the Minneapolis photo collection, Special Collections Department, Hennepin County Library.

But the Flats also presented serious health hazards. For most of the neighborhood’s history, homes had no plumbing and took their drinking water from communal pumps, which were frequently contaminated by shared privies. The shanties closest to the river provided little protection from the elements. And the area was notorious for its crime, especially on Sunday afternoons, when brewery workers threw raucous keg parties in defiance of the city’s liquor laws. In the late nineteenth century, Sunday school teachers from Westminster Church demanded a police escort to descend into this den of iniquity.

The lost world of the Bohemian Flats makes me ruminate about contemporary immigrant groups and the need to document their efforts to survive and thrive in the United States. What kind of historic record are we amassing that will allow the next generation to understand how Minneapolis was transformed by newcomers at the beginning of the twentieth century?

Quotes are from Josehine McPike, “A Community Study of the Seven Corners Branch District,” Branch Library Collection, Special Collections Department, Hennepin County Library. Other background is from Minneapolis Civic & Commerce Association, The Housing Problem in Minneapolis: A Preliminary Investigation Made for the Committee on Housing of the Minneapolis Civic & Commerce Association. (Minneapolis, 1914); Workers of the Writers’ Program of the Work Project Administration, The Bohemian Flats (1941); Mary Relindes Ellis, The Bohemian Flats (Minneapolis: University of Minnesota Press, 2014); John Edward Bushnell, The History of Westminster Presbyterian Church of Minneapolis, Minnesota, 1907-1937 (Minneapolis: The Lund Press, 1938);  Ole Rolvaag, The Boat of Longing; Jean Sicora, “One Hundred Years Later or from Bohemia in Central Europe to the Bohemian Flats in Minneapolis.” Hennepin History Magazine, 1984.