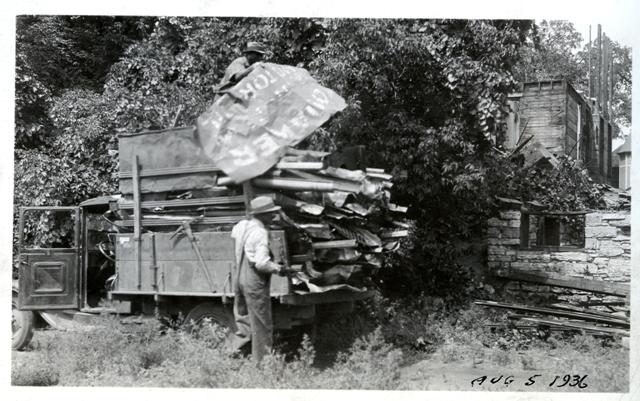 The forgotten neighborhood of Oak Lake Park, 1936. More photos digitized by Rita Yeada when we visited the tower archives at City Hall on Tuesday. In these images, demolition of the once-grand Victorians is in process. Oral histories of the North Side recount how nothing was wasted or thrown away in this neighborhood, which was home to some of the city’s least affluent and most entrepreneurial residents. 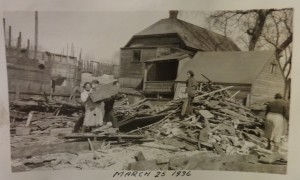 Team Historyapolis spent yesterday in the tower archives at City Hall, unearthing more treasures that we’ll share in the weeks to come. Citizen-researcher Rita Yeada was occupied with the task of digitizing a  battered scrapbook of photos we found on our last visit. This fragile volume contains black and white snapshots from all the redevelopment projects undertaken in the 1930s, when the city began its three-decade crusade against urban “blight.” The collected images show the twilight moments of Oak Lake and other neighborhoods on the Near North Side, the first target of the city’s modernization campaign.

Oak Lake was a enclave on the edge of downtown memorialized by the renowned international correspondent Harrison Salisbury, who came of age amidst the faded grandeur of its Victorian mansions and curving streets. This neighborhood was flattened in 1936-1937 to make way for our municipal farmer’s market. A huge expanse of concrete–shadowed by the 1-94 overpass– now buries the neighborhood lake and any other evidence of this ambitious late-nineteenth century development.

When it was first developed in the 1870s, Oak Lake was home to the affluent, who built the city’s first neighborhood association and its second park. By the time that Salisbury was a  boy–around World War I–most of the neighborhood’s more prosperous denizens had decamped to Loring Park or Lowry Hill to escape the noise of the railroads and the stench of Bassett’s Creek. In his memoir, A Journey for Our Times, he remembers that “my mother thought our neighborhood was becoming a slum but I don’t believe she ever convinced my father of this. He saw Oak Lake as he had seen it with his father, planting the arborvitae tree and the red cedars on the lawn, putting in the thorn apple hedge.”

By the 1920s, Oak Lake had become home to new immigrants–mostly Jewish–from Eastern Europe. “To my playmates and their families, Oak Lake was a land beyond dreams,” Salisbury remembered. “They had seen nothing like the Victorian houses, the lawns, the curving streets, the sidewalks and the elms in Bialystok or Pinsk. In the villages, they had lived in izbas of mud and reeds, with thatched roofs and clay floors. Now they occupied three thousand square feet in a mansion, bigger than the landlord’s house. If your house backed up on the railroad yards, was anything more exciting?”

Both the exclusive Victorian ambience of Oak Lake in the 1870s and its dilapidated glory of the 1920s seem impossible to imagine today. Any remnant of these earlier periods have been obliterated from the modern streetscape. The gentle curves of Royalston and Lakeside Avenues have been replaced by a landscape of modern alienation. Parking lots, highways, expressways and industrial zones hide evidence of earlier eras.

The redevelopment of Oak Lake fundamentally changed Minneapolis, though not in the way that planners envisioned in the 1930s. When Salisbury was a boy, Oak Lake physically connected North Minneapolis to the city’s growing downtown. From his home on Royalston Avenue, Salisbury easily roamed to theaters on Hennepin Avenue and stores on North Lyndale. The construction of the market complex made these perambulations more difficult. The concrete expanse of the farmer’s market became a barrier between North Minneapolis and the rest of the city. This obstacle became only larger in the following decades, which brought the construction of Olson Highway and then the interstate.

This photo is from the scrapbook of 1930s redevelopment photos, Minneapolis City Archives. My great thanks to Rita Yeada, for digitizing these photos. And to archives-keeper Bob McCune, who welcomed us into the tower and helped us to discover its treasures.