Historyapolis began in 2013, when the project was launched in the History Department at Augsburg University. Thanks to a grant from the State of Minnesota from the Arts & Cultural Heritage Fund, a team of student, faculty and community researchers spent 2014 working in archives to identify sources relevant to Minneapolis. We organized our findings in a new research guide to Minneapolis history sources that we hope will serve as a roadmap to the past. Our goal was to make it easier for everyone to dig into the city’s history. 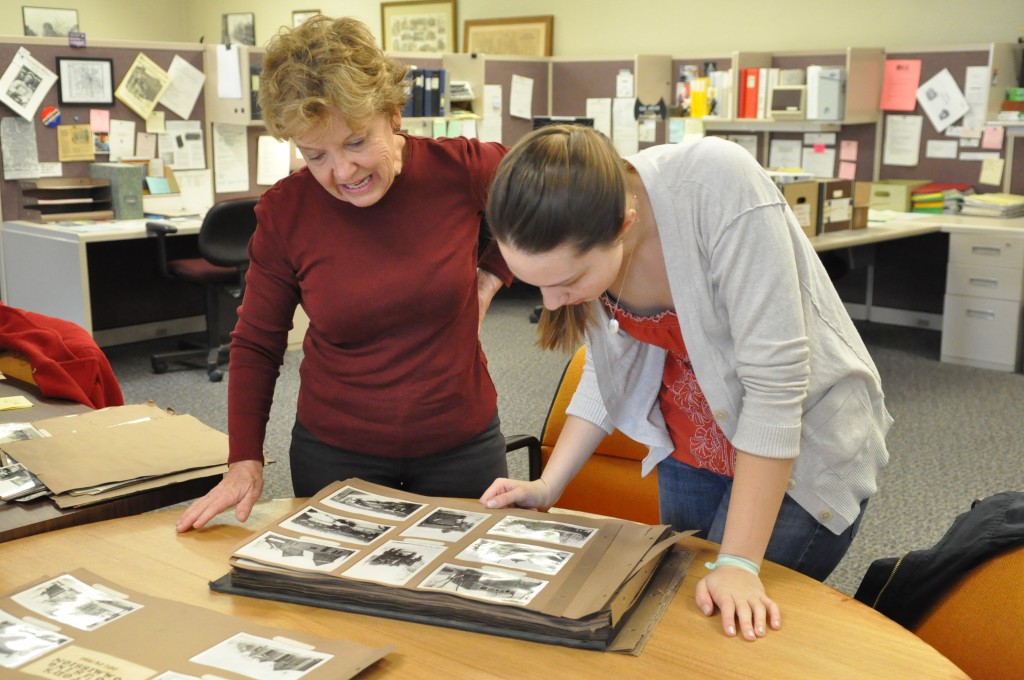 Citizen-Researcher Rita Yeada shows Augsburg junior Anna Romskog city planning photographs from the 1930s. These rare images of the near North side are some of the sources identified by Historyapolis in the Minneapolis City Archives. Members of the Historyapolis Lab worked in various repositories in 2014 to identify sources pertinent to the history of Minneapolis. Photograph by Lisa Lynch.

As we worked to identify new sources for Minneapolis history, we also experimented with using digital tools to share our insights. In 2013, we started posting historical vignettes on Facebook. That same year we developed this website, which features a blog with myriad contributors. We envision this as both a portal to the past and a foundation for new relationships in the present. The Historyapolis Project seeks to connect the curious, bringing together anyone interested in an innovative exploration of the history of Minneapolis and its contemporary meaning.

Augsburg University is surrounded by a neighborhood known as Cedar-Riverside. The traditional gateway for newcomers to the city, it was the commercial heart of the Scandinavian immigrant community at the end of the nineteenth century. Its main thoroughfare was known historically as “Snusgatan,” This area was transformed after World War II, when assimilated Scandinavians sought better housing in south Minneapolis. This exodus cleared the way for the neighborhood to become the center of the state’s small counterculture; it also became the epicenter for new battles over urban renewal, as activists resisted the idea that the wholesale demolition of the neighborhood’s nineteenth century streetscape would stem the tide of urban deterioration.

It was in this contentious period that Augsburg University began to see the surrounding neighborhood as an extension of the classroom. Over the last fifty years, the College  has earned national recognition for integrating civic engagement into every aspect of campus life. The neighborhood provides a rich environment for this kind of learning, thanks to a new wave of immigrants that has remade Cedar-Riverside into a center for East African life. Lined with immigrant businesses that provide living reminders of the neighborhood’s history, Cedar Avenue has been transformed from “Snusgatan” into “Little Mogadishu.”

The Historyapolis Project has taken root in this vibrant culture of civic engagement at Augsburg. Its students, alumni, staff and faculty have transformed this history-making experiment into a community resource. The project creates new opportunities for those interested in learning the skills necessary to use digital platforms in the service of socially-engaged local history.