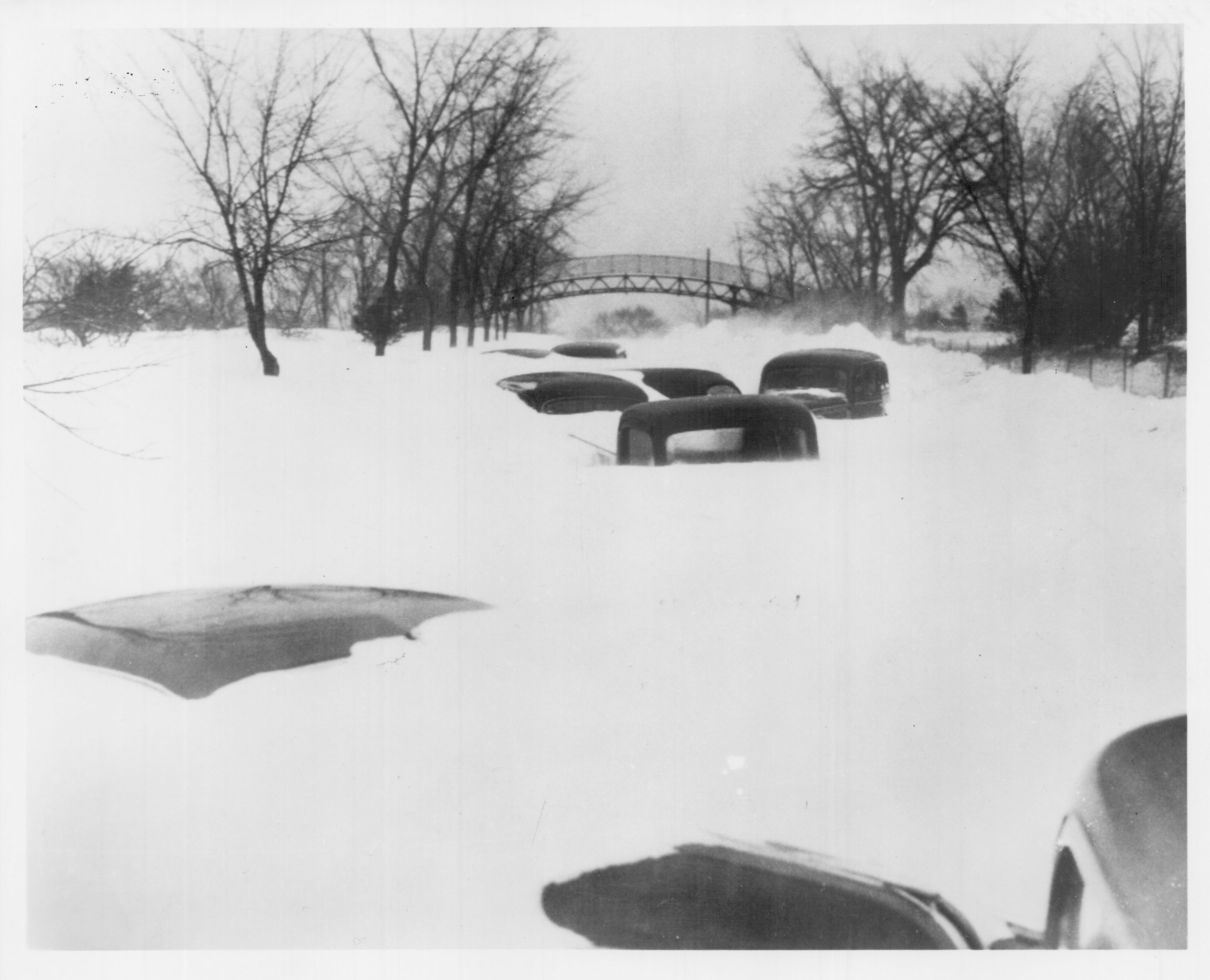 Winter always seems to take Minnesotans by surprise. Yet this seasonal change is rarely as dramatic as it was in 1940, when the region was hit with one of the deadliest blizzards in history.  On this day in 1940–on the holiday that was known as Armistice Day before World War II–Minnesotans experienced a storm that instantly became the stuff of legends.

Minneapolitan Samuel Hynes remembered that “blizzards aren’t anything special in Minnesota. I was used to waking in the morning to see my bedroom window blinded by driven snow, used to walking to school leaning into the stinging wind, my face wrapped in a scarf, eyes closed to slits, lashes crusted with rime.” But the storm that took shape on November 11, 1940 was something different, according to Hynes and everyone else. “Long after,” Hynes wrote, “folks talked about it: ‘Where were you in the Armistice Day Blizzard?’ And everybody remembered, just as they would remember where they were on Pearl Harbor Day.”

The day started rainy and dark. “By noon the rain had become sleet and the wind was rising and rattling the windows,” Hynes recounted his autobiography, The Growing Season, which chronicled his boyhood in south Minneapolis. “I couldn’t see the houses across the street.”

Hynes knew something extraordinary had happened when his father told him not to shovel the sidewallk because they were “snowed in.” “Snowed in!” Hynes marveled.  “Like Scott at the South Pole!”

When the blizzard subsided, Hynes stumbled through waist-deep snowdrifts, making his way through a still and frozen landscape to reach a friend’s house on the other side of Chicago Field. There he sat, listening to the radio for storm news. Duck hunters had frozen in boats along the Mississippi River. Trains had crashed. Families had died in stalled cars. “In the city thousands of buses and cars were stalled and buried in drifts. Streetcars couldn’t run: at the Bottleneck on Lowry Hill they slid backwards downhill. Fire trucks couldn’t reach fires. Power lines were broken and telephone lines were down. Plateglass windows in downtown stores were shattered by the wind and lay on the snow in fragments, like shards of ice.”

These dispatches, Hynes observed, were like hearing war news: “terrible things had happened, but somewhere else, nothing to do with us, sitting warm and dry in the sunlight, drinking coffee. Something vast and powerful had swept through like a great army, leaving death and destruction behind, and had moved indifferently on.” The storm claimed 49 lives. Today the Minnesota State Climatology Office ranks it second on the list of significant weather events.

This photo from the Hennepin County Libraries Special Collections shows Excelsior Boulevard–where it bisects Minnekahda Golf Course– on the day after the storm. Cars were buried in 15 feet of snow, abandoned by their owners at the height of the blizzard. 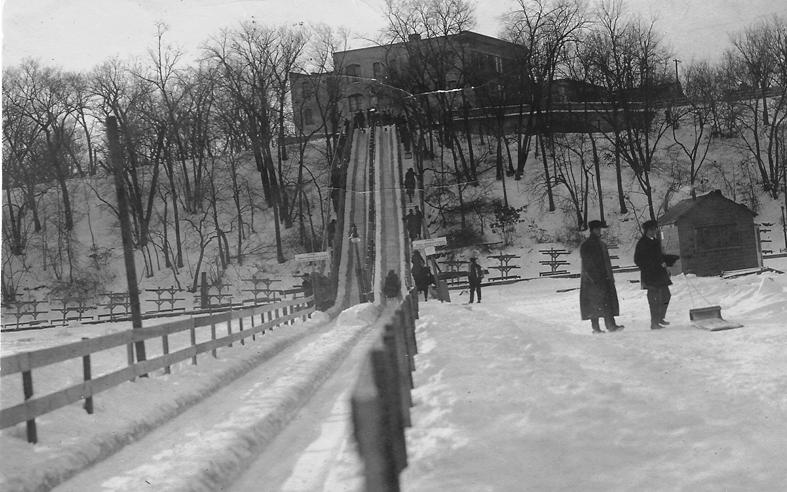 Like many of you, I’ve been watching footage from the Olympic sliding center in Sochi, where bobsled, luge and skeleton athletes rocket down the icy track at 80 miles per hour.  Before World War I, it seems that Minneapolis had its own sliding centers that delivered thrills and danger. Huge toboggan slides were constructed at Lake Harriet, Lake Calhoun, Riverside Park, Glenwood Park and Fairview Park.

In the late nineteenth century, wealthy residents formed toboggan clubs to support the construction and maintenance of slides in different parts of the city. The Makwa Club–a private group limited to 200 of the most prominent men in the young city–built its first slide in 1885 on Lowry Hill. Three years later, this group built what sounds like a sliding palace on Lake Calhoun. The centerpiece was the slide, which started on a bluff on the east side of the lake. It ran over the streetcar track and Calhoun Parkway before dropping 55 feet on to the lake. Sliders were propelled on an icy track that extended 1/3 of a mile on to the lake, before shuddering to a stop on a patch of rough lake ice. The facility was only open to Makwa members.

Illuminated with electric lights, the track was the place for smart young men with money to spend their winter nights. At the top of the slide was a warming house with a glass wall that offered views of the lake. A specially scheduled trolley dropped club members (who had gray wool uniforms) off every night at 7:40, returning to retrieve them at 9:57 pm.  The fun stopped, it seems, when it became clear that these thrill-seekers were not willing to pay the money necessary to support this private winter amusement park. According to David C. Smith, the matter ended up in court in 1891, after the man who built the track sued club members to recover the costs of slide construction and maintenance.

A few years later, the Park Board decided to build its own toboggan tracks, democratizing access to the harrowing wintertime pursuit. This image is from the enormous installation the park board built on the west side of Lake Harriet. This slide started well above the lake on Queen Avenue and extended out on to the surface of the frozen lake. First constructed in 1912, the wooden track had been the scene of several injuries by 1914. The Park Board, according to Superintendent Theodore Wirth, was facing multiple lawsuits. I’m guessing that was the end of the Lake Harriet Toboggan slide.

These images–and this information–come courtesy of park historian David C. Smith and the Minneapolis Park Board. Check out David’s blog at Minneapolisparkhistory.com. 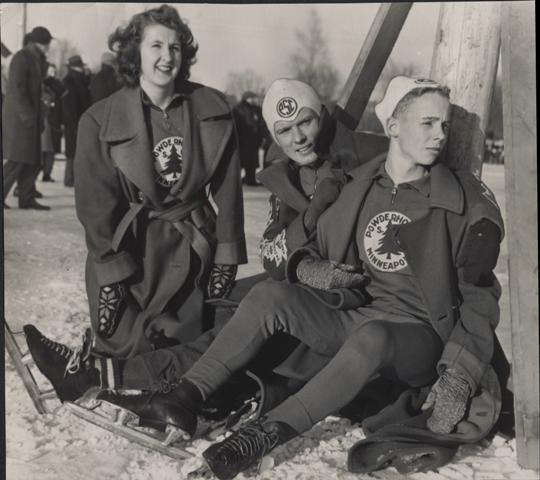 Today Minnesota sends Nordic skiers and hockey players to the winter Olympics. Sixty years ago, Minneapolis produced many of the world’s top competitors in speedskating. “Skating was the natural thing for a boy to do then,” explained Ken Bartholomew, who won 14 national championships and an Olympic silver medal for speedskating in 1948. “You either skated or did nothing in those days. You could sled or skate, but after that things were pretty dull in the winter.”

Speedskating got its start among Scandinavian immigrants to the city, who started the Norwegian-American Skating club in 1919. The next year this became the Minneapolis Skating Club, which trained and competed at Lake of the Isles, where the Park Board maintained a quarter mile track during the 1920s.

In 1930, a new track was constructed at one of the most popular parks in Minneapolis. Powderhorn Park quickly became the epicenter of the city’s speedskating culture. The club–with the support of the Minneapolis Park Board and a handful of American Legion posts–trained a generation of athletes who dominated international speedskating competitions for three decades.

Speedskating was inexpensive for athletes, a significant advantage during the Great Depression. And it was exciting to watch. Athletes started in a pack, racing one another instead of the clock. Competitors bumped and knocked each other on the way to the finish line, ending their races bruised and battered. Crashes and take-downs were inevitable on the small track at Powderhorn, where every race required athletes to circumnavigate the oval multiple times.

Powderhorn was renowned across North America for its race course, which hosted national and international speedskating competitions. Athletes called it “the best ice in the United States” and remember it as harder and faster than the artificial surfaces that became common in the 1960s.

For local kids, Powderhorn sponsored the “silver skates” competition, which pitted beginners against one another in a season-long race. At the end of February, the cumulative winner was awarded a pair of skates. It was like the story of Hans Brinker, with a lake instead of canals. Bartholomew won his first Silver Skate race at Powderhorn in 1932. 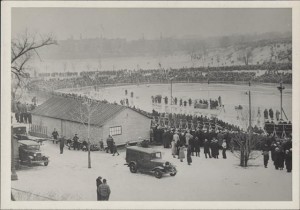 In 1934, 50,000 people flocked to Powderhorn Park to watch the U.S. Outdoor Speedskating Championships, according to park historian David C. Smith. In January 1935, it was the site of tryouts for the 1936 Olympic skating team.  When Olympic tryouts were held at the park again in 1947, four members of the Powderhorn Skating Club made the nine man American team.  Ken Bartholomew won a silver medal in St. Moritz. Johnny Werket placed sixth. Two other Minneapolitans– Arthur Seaman and Robert Fitzgerald–also competed for the United States.

Photos and information for this post is taken from the vertical files of the Minneapolis Collection at the Hennepin County Central Library.

The photo at the top shows members of the Powderhorn Skating Club in January 1947. From left to right we have Gerry Scott (senior woman champion), Ken Bartholomew (Olympic champion) and Bob Dokken, who the newspaper identified as a juvenile champion. The photo in the text shows the Powderhorn race track in 1934, when it was the site of the U.S. Speedskating Championships. 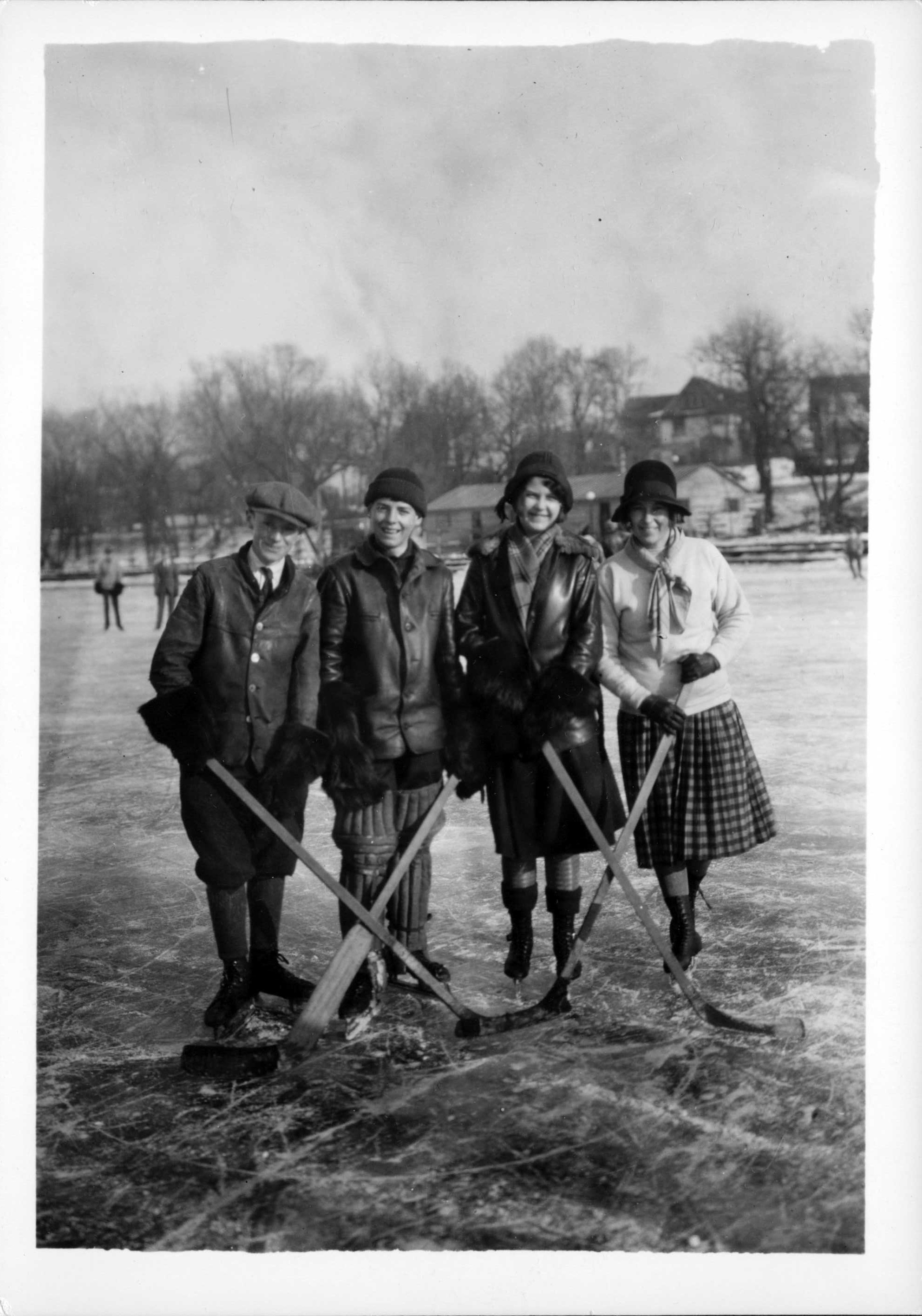