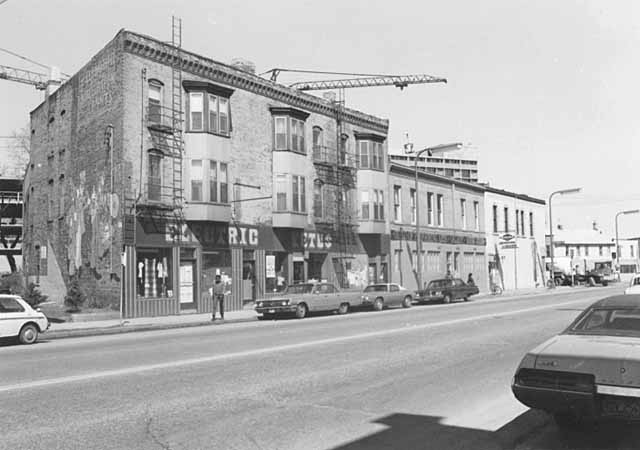 Tragic news from the Cedar Riverside neighborhood, where 514 Cedar Avenue exploded this morning. At least 13 people were injured in the blaze; as of this writing, three people have not been found in the icy ruins. The building’s first floor contained a small grocery that catered to the tastes of the immigrant neighborhood. Upstairs were inexpensive apartments that provided basic housing for new African immigrants.

When Peter Nordberg constructed this building in 1886, he designed it to house two stores on the first floor and “twenty room flats” above.  At this time, this section of Cedar Avenue was known as “Snusgatan” and was the commercial center for new Scandinavian immigrants. The traditional gateway for newcomers to the city, the neighborhood began to transform once immigration slowed to a trickle during the Great Depression.

In 1968, the struggling Cedar Riverside neighborhood provided the perfect location for a new commercial endeavor envisioned by two U of M students. Ron Korsh and Dan Foley started the Electric Fetus music store at 521 Cedar Avenue in 1968, hoping to sell the psychedelic rock music they heard coming out of San Francisco. Korsh quickly became bored with the store and sold his share to Keith Covart, who is crediting with making the business a long-lasting success.

These counterculture entrepreneurs kept their store in the news. In 1969, police confiscated a poster from the store that depicted a nude couple resembling President Richard Nixon and his wife. Notoriety (and low record prices) helped the store to grow, forcing it to seek larger quarters across the street. In October, 1969 it moved into 514 Cedar Avenue, the building destroyed in this morning’s blaze.

In 1970, Covart was arrested after the store displayed a United States flag with a peace symbol superimposed in the spot usually reserved for the 50 white stars. In 1972, the store held a “naked sale,” offering free records and pipes to nude patrons. After fifty people showed up to claim their free merchandise, the store lost its lease on Cedar Avenue.

With the influx of Somali immigrants, Cedar Riverside has once again become a first stop for new arrivals to the city. And the building at 512-516 Cedar had reverted to its original purpose. The tiny apartments and ethnic businesses destroyed this morning would have seemed very familiar to Peter Nordberg, the nineteenth century entrepreneur who recognized the economic potential of a new immigrant community.

Photo from the Minnesota Historical Society. And material for this post is taken from the excellent history of the Electric Fetus written by Penny A. Petersen and Charlene K. Roise in July, 2006.