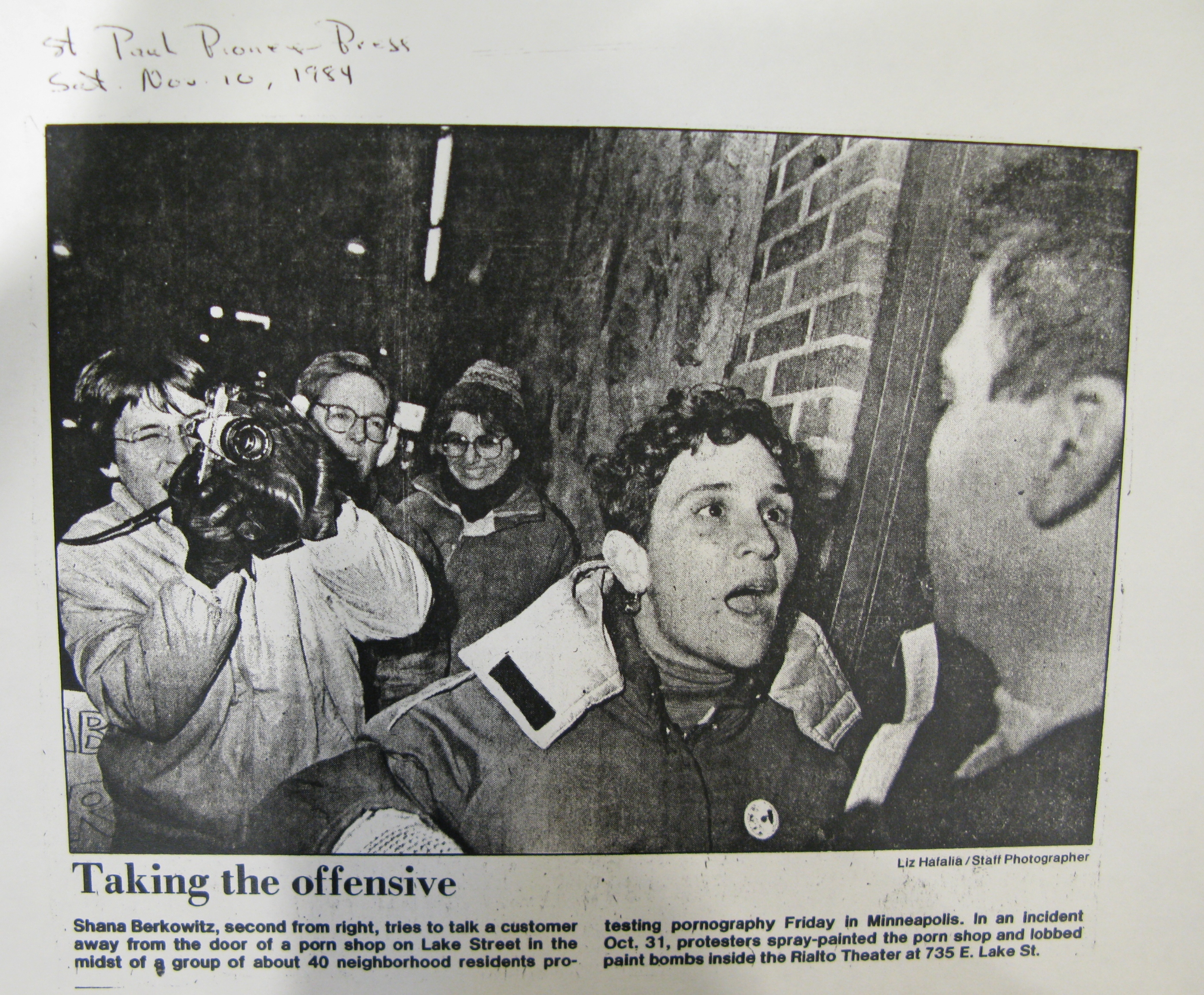 Today’s blogger is Kevin Ehrman-Solberg, a senior history major at Augsburg and one of the student interns at the Historyapolis Project for 2014. Kevin will be a regular presence on this blog. Today he shares some of the research he has been doing for his senior thesis, which examines the conflicts and controversies engendered by the burgeoning pornography industry during the 1970s and 1980s.

This photo from the St. Paul Pioneer Press, published in November, 1984, shows an angry group of women protesting a pornographic bookstore on Lake Street in Minneapolis. They were part of a national movement of women  who rallied under the phrase coined by radical feminist Robin Morgan: “Pornography is the theory, and rape is the practice.” The idea was that not only was pornography degrading to women, it promoted misogynistic violence.

By the early 1980s, communities across the country were consumed by this issue, which sparked what many observers came to call the “sex wars.” But there was no city where this issue was as contentious as in Minneapolis. And on December 30, 1983 the Minneapolis city council voted to ban pornography.

This ordinance was authored by radical feminists Catherine MacKinnon and Andrea Dworkin. But it had the backing of women like the protesters pictured here, who had become increasingly upset about the growing presence of pornography theaters and bookstores along Lake Street in South Minneapolis.

These weekly “browsing” sessions sometimes became full-blown demonstrations like the one shown here. On December 2, 1983, nationally renowned radical feminist Andrea Dworkin, led approximately 150 women into a bookstore at Lake Street and Chicago Avenue. One of the participants was Bonnie Fournier who later wrote a letter to local gay and lesbian paper, Equal Time, chronicling her experience. “It began gently enough: wanting to see the reality, wanting to experience the shock, milling around, pointing, gasping…More and more women entered. Filling the aisles, marching, touching, depositing magazines on the floor, tearing, throwing objects, shouting, trampling.”

Usually, however, “browsing” was more of a low key affair involving around a dozen women, albeit one that most certainly made the bookstore customers uneasy. When several browsers stood in front of the bookstore on 401 E. Lake in the July of 1979 to pose for a picture, a man who had just walked out from the store dove over a bus stop bench to avoid having his face caught in the frame.

Browsing was a simple and effective way for women in South Minneapolis to demonstrate against the pornography business that they felt were endangering them and their communities. And it certainly worked, at least as far as making the customers uneasy. As the clerk at the 401 E. Lake bookstore said, “They been in here before. It just doesn’t look right to have a bunch of women standing in here.”

The city ordinance banning pornography was vetoed by Mayor Don Fraser in early 1984. But the protests in the Minneapolis pornography district continued until technological changes made brick and mortar theaters and bookstores obsolete and ultimately unprofitable.