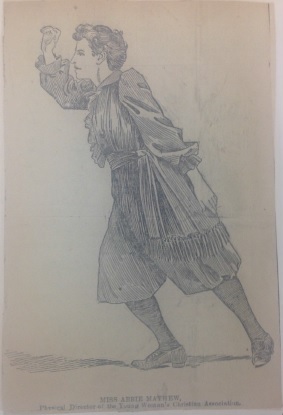 In honor of bicycle week, Historyapolis is going to pay homage to those who laid the foundation for our thriving cycling culture in Minneapolis.

In the 1890s, the United States was seized by what historians have called a “bicycle craze.” Minneapolitans were not immune to the seduction of two wheels. So in 1894, a group of young women decided to organize a cycling club that would take group “runs” to Cedar Lake and Lake Harriet twice a week.

Yet before they could embark on their first outing they had to settle a pressing question. What to wear?

The answer was provided by Abby Mayhew, pictured above, who can be credited with bringing physical fitness for women to the city. After arriving in Minneapolis in 1892, Mayhew started gym classes at the Young Woman’s Christian Association. She attracted both wage-earning women and their socially prominent sisters to her downtown gymnasium.

In the spring of 1894, she resolved to bring her female athletes, in the words of one newspaper account, “into the boulevards, country roads and upon the bosom of the waters.” The result was summer outing clubs for the growing membership of the YWCA. Thanks to Mayhew, Minneapolitans got accustomed to seeing large groups of women biking, rowing and playing tennis in the city’s parks.

This kind of physical activity was impossible without proper attire. So Mayhew designed a bloomer costume for lady athletes. This issue drew the fascinated attention of the city’s journalists, who made repeated visits to the YWCA to observe and sketch the costumes of the exercising women. And a reporter was on hand when members of the newly constituted bicycling club voted “amid the blushes of the fair members” to wear Mayhew’s bloomers “at each club run.” 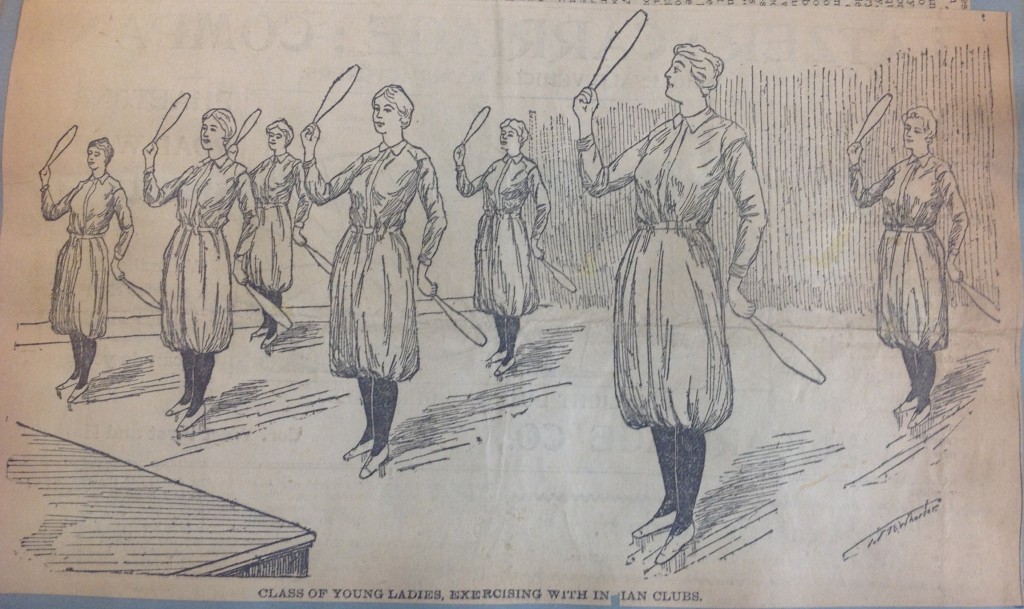 Women in “Syrian garb” exercising at the YWCA, c. 1890s. Image is from the YWCA Scrapbooks, Social Welfare History Archives, the University of Minnesota.

The “Syrian garb,” as Mayhew called it, was both “attractive and sensible” though it was shorter than other bloomer costumes seen in the city since it clasped “well up to the knee.” But the would-be cyclists steeled themselves with the resolution that “union is strength.” They decided to “make their first essay at public appearance in this garb together. Being sweetly sensible girls of the right calibre,” the newspaper reported, “they will doubtless persuade man to show his gallantry by not staring or being otherwise rude.”

On a May evening in 1894, the inaugural run of the bicycle club attracted the curious but not the vulgar. Newspaper accounts marveled at the spectacle of “nearly 20 young women in bloomer costume, ready to mount their wheels. . .in front of the Young Woman’s Christian Association rooms on Nicollet Avenue.” Only “one solitary member of the party was without the divided skirt; the rest adopted the latest cut and set an example in a body.”

After their ride, the women wrapped up the evening with a social hour at the YWCA. This group was led by Captain W. Snow and her lieutenant Madge Elliott. This fearless band of pioneers included Mlles. E.E. Mills, Kittie Webster, Hattie Evans, Fowler, Nichols, Butman, Dunn, as well as sisters Chadbourne and sisters Peck. The matrons included Mesdames Blair, Hall, Witchie, Chator and Nash.

To these women, I say thank you for defying gender conventions to get on your wheels in public. Their trepidation may seem laughable to modern day readers who don shiny spandex and cycle to all corners of the city. But these lady riders were part of a long-running effort by women to claim public space. They likely did not identify as feminists. But they shared the feminist vision that women should be able to move –under their own power and in the company of other women–through city streets without harassment.

Abby Mayhew left the city three years later to head the physical education program at the University of Wisconsin, Madison. She returned to the Twin Cities upon her retirement in 1930, dying in 1954 at the age of 90. Perhaps all that physical activity paid off.

Images and text for this post is taken from the 1894 scrapbooks of the YWCA, Box 12, YWCA Collection, Social Welfare History Archive at the University of Minnesota.