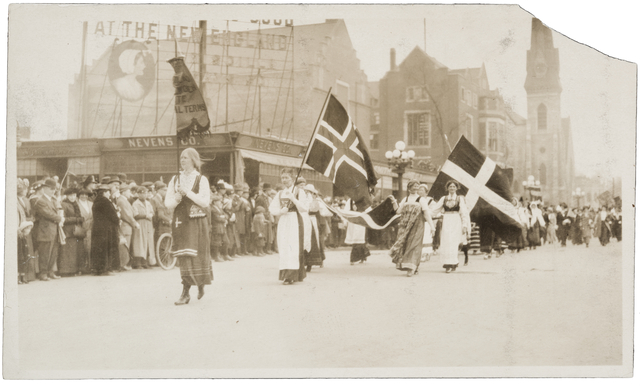 Today’s blogger is Anna Romskog, a junior history major at Augsburg College and an intern with the Historyapolis Project.

Exactly 100 years ago today, “Minneapolis learned by practical demonstration that those who ask the ballot for women are distinctly not a bevy of hopeless spinsters, unhappily married women and persons who have nothing else to do,” according to the Minneapolis Morning Tribune. Members of the Scandinavian Woman Suffrage Association–shown here– joined 2,000 other suffrage advocates in a procession through downtown, where they braved a gauntlet of jeering men.

The demonstration in the heart of the city’s fashionable shopping district–which was organized by a coalition of organizations demanding political equality for women –took its inspiration from the militancy of British suffragists, who had embraced confrontational direct action tactics in an effort to force the question of female enfranchisement. Marchers’ public show of force reflected a fresh spirit of impatience among women activists in Minnesota, who had been demanding the vote since the since the founding of the city in the 1870s. “By the time they had passed,” the Tribune reported, “the onlookers were impressed with the fact that there is in Minneapolis a considerable army of women sufficiently determined to have the ballot to march through the streets to get it.”

Flag-wielding demonstrators went down Second Avenue to Fourth Street and back down Nicollet. The silent marchers were “not what the multitude of watchers had expected,” according to newspaper coverage.  “They saw women of every walk of life, young women, old women, middle-aged women, working women, rich women, women beautiful, women otherwise.” Immigrant groups–like the one pictured here–were prominent in the demonstration.

The reporter dedicated the most copy to the physical attractiveness of marchers, who defied contemporary stereotypes about women activists. “The chap who had formed the idea that hopeless spinsters were in the majority in suffrage ranks, that girls with plenty of suitors were absent from their roster was terribly jolted,” the anonymous writer declared.

One of the younger marchers–Helen Jones, who was a senior at Minneapolis Central High school and president of the Junior Mobile Suffrage Squad later remembered:

We were told to keep our heads up, eyes in front of us, and to walk in dignity and silence…I never felt so serious in my life and didn’t look at the crowd at all…Some horrid men threw money on our flag and did and said other rather insulting things. It really seemed absurd that the red-faced, [coarse][sic], sneering men whom we passed could vote, and the noble, fine women in the parade could not.

American women gained full voting privileges six years after this parade, with the ratification of the Nineteenth  amendment.

Material for this post was taken from “Paraders Place Equal Suffrage on a New Plane,” from the Minneapolis Tribune, May 3, 1914 and Barbara Stuhler, Gentle Warriors. The image of the Scandinavian Woman Suffrage Association is from the Minnesota Historical Society. 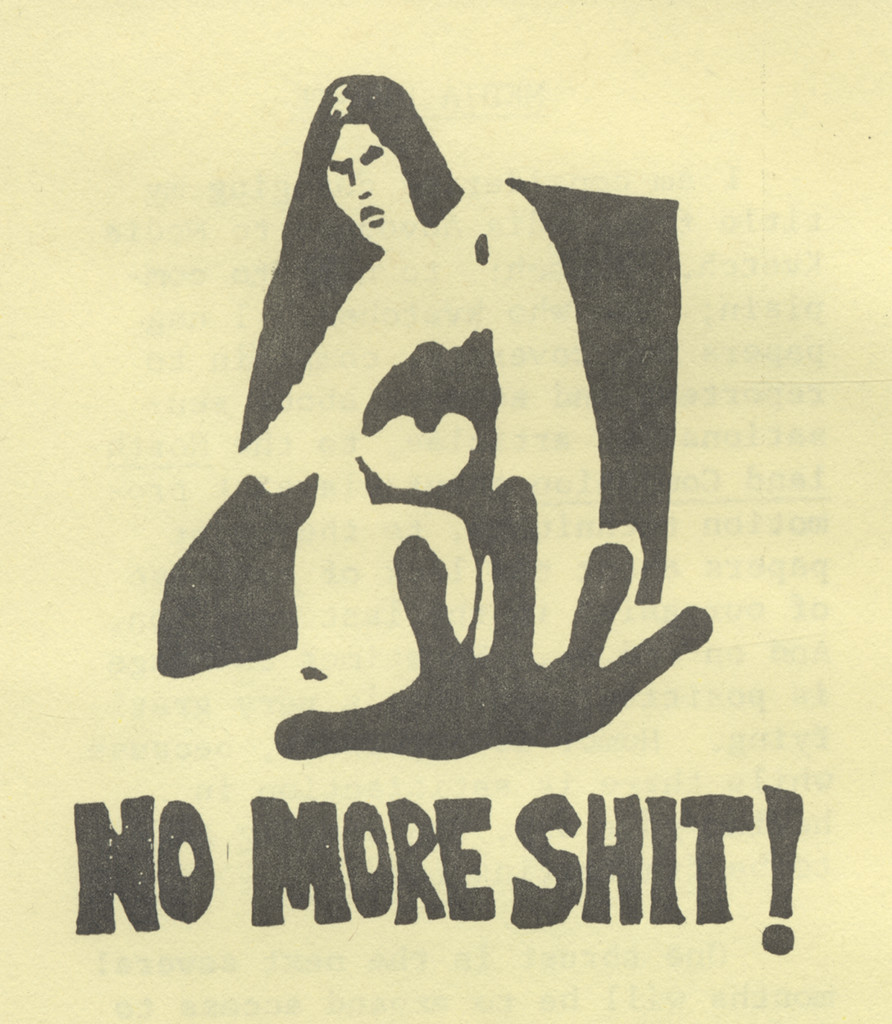 Guest blogger today is Stewart Van Cleve, a graduate student in the program for Library and Information Science at St. Catherine University and the author of Land of 10,000 Loves: A History of Queer Minnesota. In this post, Stewart writes about Minnesota’s first statewide lesbian organization: the Lesbian Feminist Organizing Committee.

Since her 1980 election to the Minnesota Legislature, Representative Karen Clark has become a powerful voice in state politics. She and State Senator Scott Dibble helped lead the battle against a constitutional ban on same-sex marriage and, more recently, she became the House sponsor of Minnesota’s same-sex marriage bill, which Governor Mark Dayton signed into law last May. She looked on with her partner, Jacquelyn Zita, as Governor Dayton signed the bill, ending a fight for marriage equality that originated alongside Clark’s political career in the 1970s.

Clark’s foray into politics began four decades ago, when she participated in the landmark Sagaris Institute, a 1975 feminist conference held in Vermont. Though the Institute collapsed due to participant infighting and fears of FBI infiltration, Clark returned to Minnesota with inspiration, and she began organizing women from her home in the Powderhorn Park neighborhood. After a series of discussions with a diverse group of Minnesota women from around the state, she helped create Minnesota’s first statewide lesbian organization: the Lesbian Feminist Organizing Committee (LFOC). Though it only lasted for six years, the LFOC forged a local lesbian community that built the political infrastructure necessary for the immense cultural changes that transpired four decades later.

From the beginning, the LFOC called for radical change. “Lesbians are an oppressed minority,” the organization stated in its “Principles of Unity,” “…[and] we are working for the destruction of patriarchy, and for the development of a system in which there is an equitable distribution of power.”  To help achieve the LFOC’s broader goals, Clark devised an innovative organizing strategy inspired by Marxist thought; she helped women create largely-autonomous “cells” that determined its own needs and objectives while simultaneously assisting the activities of the “mother organization,” which published newsletters and led organizing workshops for cell leaders.  The structure proved extremely effective in responding to the myriad and often immediate needs of Minnesota lesbians. In an interview for Land of 10,000 Loves, one of the LFOC’s principal organizers, Janet Dahlem, remembered: “when people came to us with needs, we were able to respond and create a committee or a subgroup…we had a Lesbian Mother’s Legal Defense Fund because a women had lost her  children to her heterosexual husband simply because she was a lesbian.” In addition to the Mother’s Defense Fund, the LFOC also led an organizing effort to curtail anti-lesbian hate crimes, which were ignored by both gay and mainstream news sources.

Simply by creating a political structure that gave women leadership roles, the LFOC helped destabilize male dominance in local politics, especially in south Minneapolis, where most members lived.  The LFOC also helped Clark establish a mobilized base of dedicated volunteers who helped her first successful bid for elected office in 1980. Without the LFOC, Clark’s career, and thus the marriage equality legislation that defines it, would likely have not been possible.